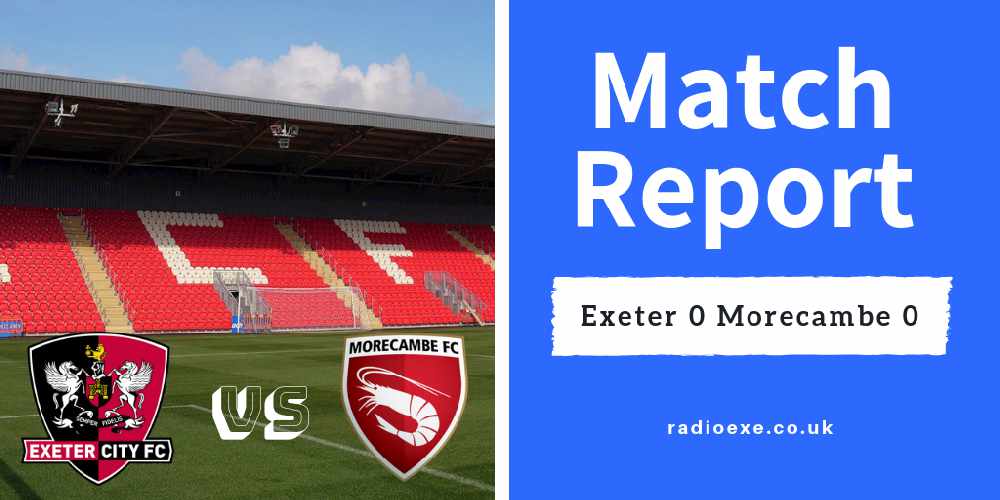 City manager Matt Taylor made one change to the side that beat Swindon Town on New Years Day. Lee Holmes returned to the starting eleven following a short spell out with injury.

In a first-half that featured very little action, it was Exeter who came closest to breaking the deadlock. Holmes, who proved a nuisance to the Morecambe defenders on the right hand side, looked the most threatening going forward. Within the opening 20 minutes, the winger produced a number of crosses into Morecambe’s box, but his teammates struggled to get on the end of them.

The Grecians, playing with an attacking mindset, controlled the game and enjoyed the majority of possession –.their best chance came in the 31stminute. Inside Morecambe’s box, Pierce Sweeney smashed an effort towards goal but Mark Halstead showcased a fine save to tip the ball onto the bar and over.

Nicky Law came agonisingly close to scoring soon after, his headed effort went just wide of the post to sum up a frustrating opening 45 minutes for the Grecians as it ended goalless.

A stubborn, well organised Morecambe defence proved difficult to carve open in the second half.

With less than 20 minutes to play, Matt Taylor called upon Matt Jay and new signing Ryan Bowman to score the winner. However, the replacement duo couldn’t make an impact.

With Exeter focusing on getting a goal, they nearly fell behind. Christy Pym pulled off a terrific finger tips save to deny a free kick just outside the box. It could have finished either way, in the end, it finished 0-0.