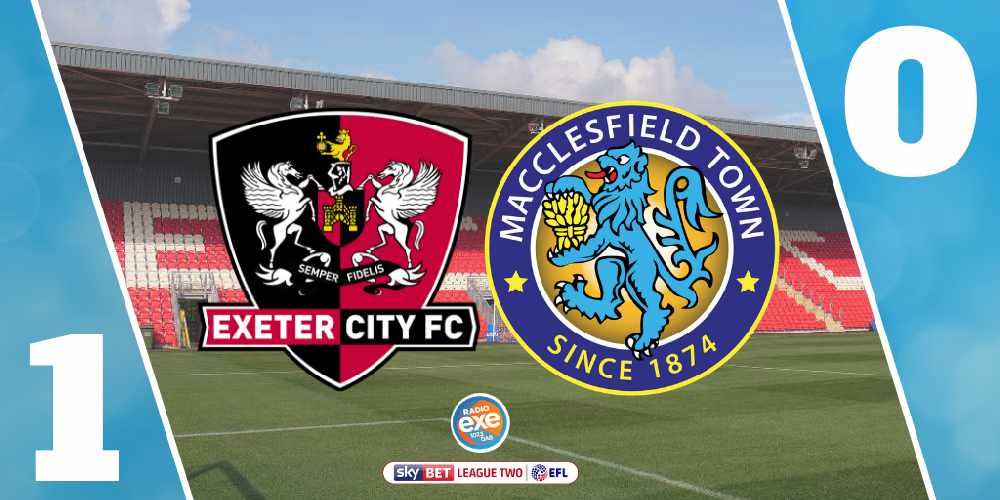 Macclesfield, who scarcely survived relegation by three points last season, frustrated Exeter for much of the opening 45 minutes.

The Grecians created chances, but the visitors, managed by former Arsenal legend Sol Campbell, were well drilled in defence and denied Exeter breaking the deadlock inside a goalless first-half.

City’s first clear goalscoring chance came in the 14thminute. Pierce Sweeney created room on the right-hand side to whip in a ball towards the head of Ryan Bowman, the towering centre forward made good contact with the ball, but he guided in over the crossbar.

Moments later, summer signing Nicky Ajose caused all sorts of trouble for Macclesfield’s back four and created the first shot on target. The 27-year-old forward combined well with Nicky Law inside a congested box before curling an effort into the hands of Macclesfield’s goalkeeper Owen Evans.

Having been a spectator for much of the half, City’s new goalkeeper Lewis Ward reacted well to palm away a header from Mills Welsch-Hayes from five yards out, ensuring it ended goalless at the break.

The early stages of the second half belonged to Macclesfield - who controlled possession and came agonisingly close to scoring the opening goal. Ward produced another fine save down to his right before Dean Moxey dived in with a goal saving tackle inside the five-yard box.

City weathered the storm well, however, to turn the screw and attack Macclesfield’s goal with real threat. Tom Parkes had two great opportunities but couldn’t find the back of the net. City’s newly signed centre back narrowly missed with a header at the back-post before seeing another header blocked on the line.

After a long waited 88 minutes, Exeter eventually found the back of the net. Law fizzed in a low half volley, that was deflected of Bowman, and fortunately the ball was directed into the goal.

Full-time at St James Park on the opening day of the season: Exeter City 1 Macclesfield 0