Exeter City march on in the FA Cup 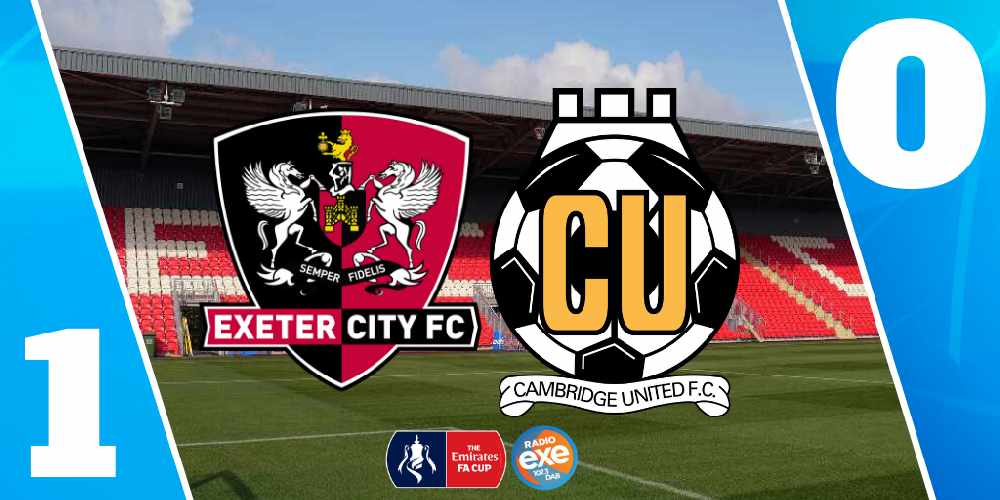 Alex Fisher’s second half strike was enough to beat Cambridge under the floodlights at St James Park and secure Exeter a spot in the second round of the FA Cup.

The Grecians will face national league side Hartlepool in the next round – scheduled for December 1.

-----
Exeter manager Matt Taylor made three changes to the side that drew 1-1 against Cheltenham on Saturday. Nicky Law, Lee Martin and Craig Woodman all came into the starting 11.

Under the floodlights at St James Park, it was an extremely slow opening half with very little opportunities for both sides. There were no shots on target - but City came the closest to breaking the deadlock just three minutes in.

Attacking down the right flank, Woodman whipped in a good-looking ball towards Alex Fisher. The centre forward did well to get in front of his man, but he couldn’t make any contact with the ball as it flew just wide of the far post.

Matt Taylor’s men enjoyed the majority of possession inside Cambridge’s half - but they manged just one shot on goal. Nick Law tried his luck from 30 yards and his effort was blocked. Cambridge, likewise, struggled in the final third – the visitors didn’t even have a shot at goal. It ended all square at the break.

The biggest cheer of the evening came in the 56th minute when Exeter had their first shot on target! Lee Martin fired an effort at goal from the edge of the box. The winger created some room with good footwork; however, his placed shot was saved by the goalkeeper.

Another huge cheer resonated around St James Park five minutes later when Nicky Law and Randell Williams eyed up two more efforts outside the box. But both attempts, that were difficult chances, flew over the crossbar.

Matt Taylor needed to make drastic changes if his side were to break the deadlock – so he brought on Ben Seymour. The academy graduate made an instant impact and played an instrumental role in scoring the long-awaited opening goal.

The youngster used his pace well to get in behind Cambridge’s defence, he then pulled the ball back for Fisher who fired home from five yards out.

The hosts defended well in the final stages, and despite six minutes of additional time, Exeter dug deep and hung onto the win. Full time: Exeter City 1 Cambridge United 0.