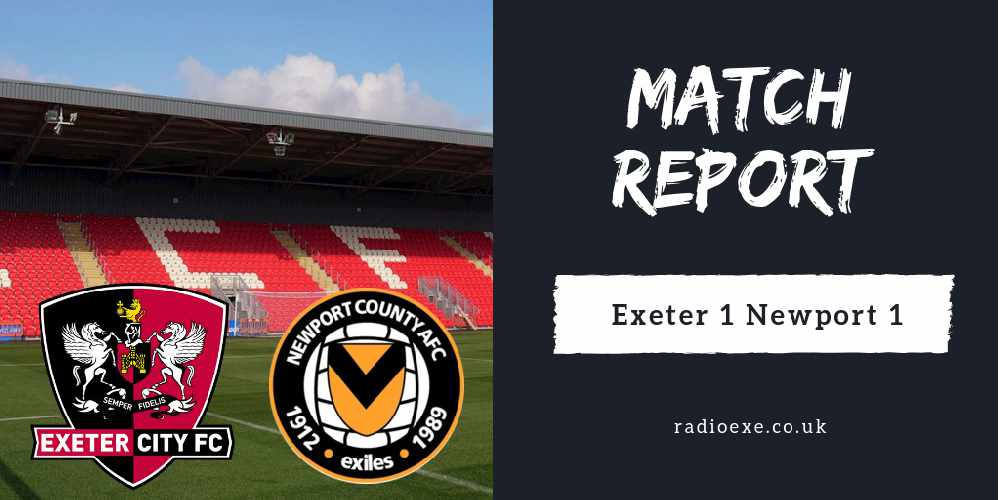 It finished 1-1 against Newport County at St James Park

Exeter’s Jayden Stockley headed in the only goal of the opening 45 minutes. City’s Nicky Law hit the crossbar in the second-half soon before Newport scored the equaliser with 10 minutes to play.

Last year’s League Two Play-Off final will be remembered vividly by the Grecians, but as Matt Taylor said in his pre-match press conference, they’ve got to dust themselves off and focus on the new challenge ahead. They’ve done just that so far this campaign, Exeter have had a robust start to the season. Four games. Three wins. One draw.

Five minutes in, City survived an early scare. Captain Jake Taylor was in the right place at the right to block a shot inside the box soon before Christy Pym turned another effort behind his post for a corner.

15 minutes later, it was the Devon side that took the lead.  Lee Holmes whipped in a delightful ball towards the head of Jayden Stockley who guided the ball into the bottom corner. It finished 1-0 a half-time.

The Grecians came tantalizingly close to scoring a second, on three separate occasions. Holmes, who set up the opening goal for city in the first-half, saw his headed effort denied by a diving goalkeeper. Stockley’s effort was denied superbly by the keeper once more 5 meters out soon after Nicky Law rattled the cross bar with an effort outside the box.

However, with just under 10 minutes to play, Newport scored an equaliser. Mark Harris fired his effort past Pym. The momentum swung in favour of the visitors in the dying embers of the game but it finished 1-1 after 90 minutes.

Up next for the Grecians, it’s Cambridge United on Tuesday evening.