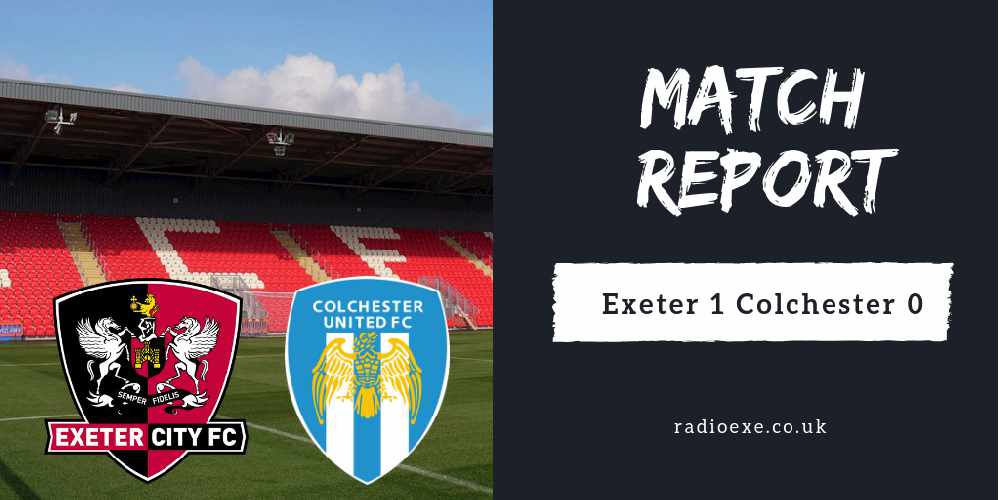 City finish the season in fourth place with victory against Colchester

City's goalkeeper Christy Pym, who was presented with City’s prestigious player of the year award before kick-off, saved a penalty soon before Robbie Simpson, who had a goal disallowed in the first-half, headed home in the second.

The win, Exeter’s 24thin the league this season, has secured a home second leg play-off place after narrowly missing out on automatic promotion. The performance from the Grecians this afternoon will certainly put a smile on Paul Tisdale’s face as his side look to book another place at Wembley Stadium later this month.

The Grecians, who were looking to bounce back after suffering a 3-1 defeat against Stevenage last week, made five changes from last time out. Troy Archibald-Henville, Jordan Moore Taylor, Ryan Harley, Kyle Edwards and Liam Mcalinden all start.

Within 10 minutes, the home side created the best chance of the first-half. Mcalinden, who replaced city’s top goal scorer Jayden Stockely up front, created it. Inside the box, he calmly chipped the ball over the goalkeepers head to create an open goal. Rather than passing the ball into the net, the striker decided to cross the ball to Robbie Simpson who was inches away from heading the ball into an unguarded net.

As Exeter continued to whip in dangerous balls into the heart of Colchester’s box, the ball found the head of Simpson, who this time, found the back of the net but his goal was disallowed for a foul.

Down the opposite end, City looked comfortable in defence. Nothing troubled city’s player of the year Pym between the sticks. It finished goalless after 45 minutes.

The game started to open up in the second half as the forwards began to exploit space in behind. As the game opened up, both teams created more chances, the best opportunity to take the lead fell to the visitors after winning a penalty. Saved by Pym with his feet.

Deservedly, having dominated possession, City took the lead. Pierce Sweeney floated in a cross to the back post which was headed in by Simpson. It finished at full time: Exeter 1 Colchester United 0

Up next, the play-offs.