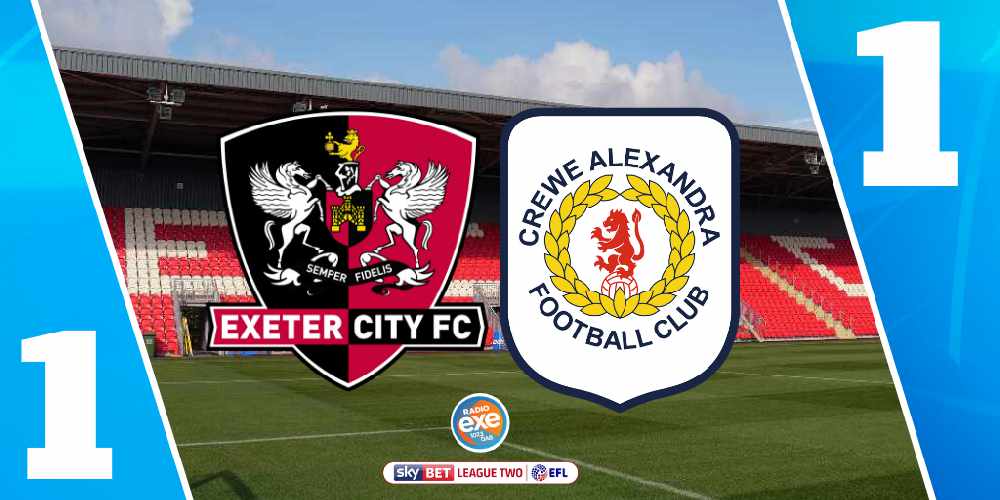 Exeter’s grip on the automatic places was loosened this evening as they drew 1-1 against promotion rivals Crewe Alexandra – in what some fans call the biggest game of the season.

Exeter City manager Matt Taylor made three changes to the side that drew 1-1 with Crawley on Saturday. Nicky Law, Archie Collins and Aaron Martin all came into the starting 11.

It was soon clear to see why Crewe were second in the league. The visitors looked comfortable on the ball and well organised at the back – and they came the closest to breaking the deadlock. Crewe had the ball in the back of the net in the 10th minute, however, the linesman ruled the goal for offside.

It proved to be a rare shooting opportunity though as both teams struggling to breach determined defences. The majority of the game was being played in the middle of the park.

But eventually, in the 31st minute, the Grecians created their first shot on goal and scored. Tom Parkes kicked the ball into the bottom corner following a Nicky Law corner.

On the stroke of half time, Randell Williams nearly doubled City’s lead following another corner. The ball was whipped in towards the winger who struck the ball first time on the volley - but it went straight at the keeper. It ended 1-0 at the break.

The Grecians came close again after the break – Ryan Bowman’s shot was well blocked five yards out – but it was Crewe who scored next. City failed to clear an in swinging free kick as Michael Nottingham flicked the ball past Lewis Ward to equalise.

City pushed hard for the winner in the later stages of the second half. They came close on a few occasions. Crewe goalkeeper Will Jaaskelainen pulled off an unbelievable save to deny an Archie Collins’ 25 yard strike and Bowman marginally volleyed the ball over the bar.

In the end, though, the Grecians had to settle for a 1-1 draw.