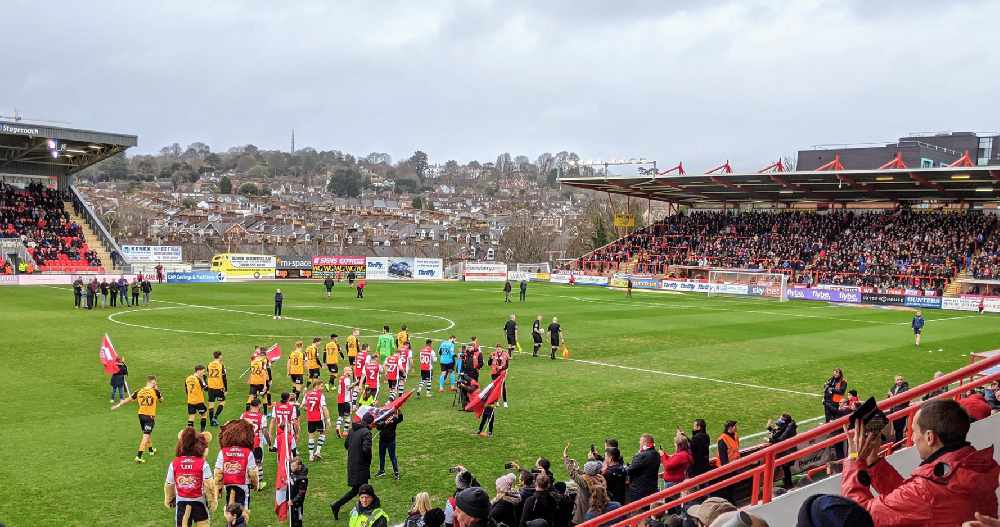 Grecians boss Matt Taylor made just the one change from the side that won 1-0 at Forest Green Rovers last time out in League Two - captain Jake Taylor replacing the suspended Nigel Atangana, who picked up a goal and a red card in Gloucestershire.

Despite their lowly standing in the table, the visitors dominated the early stages and thought they had a penalty early on. Luke Hannant was felled in the area, only for referee Luke Oldham to take a dramatic pause before pointing to the corner flag.

Both sides huffed and puffed without creating any clear cut chances, though Exeter’s Lee Martin did see a fizzing strike from the edge of the area go just wide after good work from captain Taylor.

Then just minutes before the interval, referee Oldham walked off down the tunnel, much to the bemusement of all those inside St James Park. After a long delay, it was announced that he was injured and replaced by the fourth official Justin Amey.

Nine minutes of added time ensued, and it featured the best chance of the half. The lively Martin was played through on goal, only for visiting stopper Dimitar Mitov to smother his shot.

After the interval, Colin Calderwood's visitors were again quick out of the tracks and were denied an opener by the post, Harvey Knibbs' strike leaving City goalkeeper Johnny Maxted stranded.

Football's a game of fine margins as the old saying goes, and just so it proved moments later. After some tricky work by home favourite Nicky Law, he played a low cross into the path of Ryan Bowman for his 10th league goal of the season.

The second half was proving to be a thriller after a turgid opening 45. Hunting for a quick leveller, Cambridge sprung up the other end and should arguably have equalised, but Liam O'Neill's free header spiralled over the bar.

Exeter, clearly buoyed by their goal, then saw a trio of chances go just off-target after excellent play by midfielders Collins and Law, the latter beginning to dictate proceedings.

Despite pushing for a second, the scores were almost level when young Jayden Richardson lost the ball in a dangerous area for City. O'Neill, however, was guilty of missing another guilt-edged chance after it was crossed into his path.

Midfielder Paul Lewis then put his name into the hat for Cambridge's miss of the month competition. The Grecians failed to clear a hopeful ball into the box, before the 25-year-old sliced a close-range effort wide. Maxted's goal was beginning to live a charmed life.

Not that it mattered moments later, however. After United's Harrison Dunk slipped while attempting to clear in his own area, the ball fell kindly for Randell Williams who gratefully smashed it home past Mitov.

Law very nearly added a third in stopped time, only for a visiting defender to bravely block his strike, on what proved to be another good afternoon's work for City.