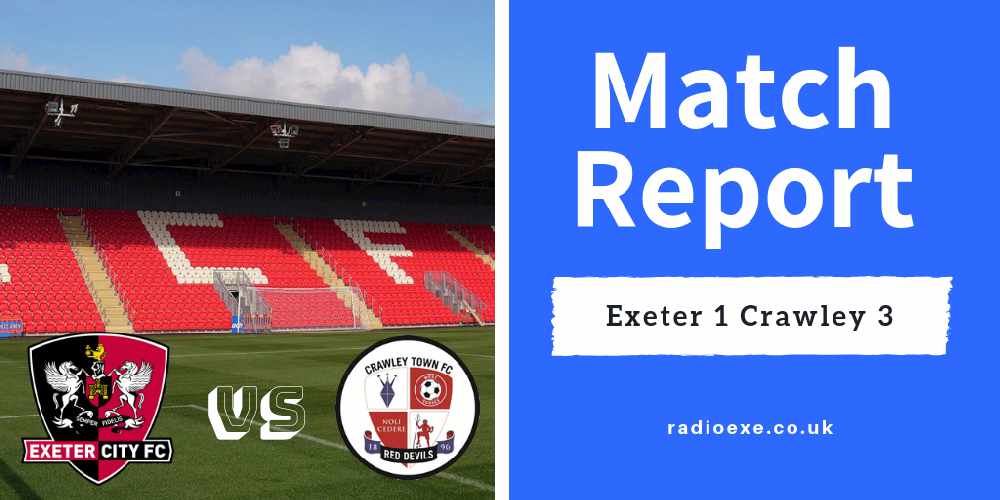 It’s a damaging defeat in City’s quest to gain promotion, but they remain in the play-off places by fine margins.

With just three games remaining this season the pressure is beginning to build - and It’s now imperative that City start picking up points in their final few games to keep their play-off hopes alive.

Grecians manager Matt Taylor didn’t make any changes to the side that impressively beat Port Vale 2-0 on Saturday.

It was a disappointing opening half for Exeter - who were playing far from their best.

In a slow paced opening 20 minutes neither side managed a shot on target. It was the hosts, however, who came closest to scoring.

Five minutes in, City’s academy graduate Archie Collins whipped in a dangerous ball for Ryan Bowman who headed his effort narrowly wide of the post.

It took half an hour, but eventually, the first clear cut chance was created – and it was constructed and well executed by the visitors.

Exeter’s centre back Dara Oshea was caught in possession by Panutche Camara and Crawley quickly countered. Camara showed good pace down the right hand side before firing the ball across the face of goal for Filipe Morais - who smashed Crawley into the lead from 15 yards out.

Minutes later, the visitors silenced St James Park and snatched a second. Crawley midfielder Reece Grego-Cox scored his first goal of the season after lifting the ball over Christy Pym following another dangerous cross that city failed to clear.

Matt Taylor’s men huffed and puffed for a second, and following a five minute bombardment, they came agonisingly close on a number of occasions.

Captain Jake Taylor skimmed the post with a header, Hiram Boateng hit the bar from five yards out and Troy Brown had his close range shot heroically blocked on the line. City dominated the dying embers of the half, but went into the break a 2-0 down.

A disappointing first half as the Grecians trail Crawley by two goals at the break. #ECFC pic.twitter.com/Rbp5OhOiKJ

Exeter started the second half where they left off, and within five minutes, they pulled a goal back.

It was a dream start to the half for Matt Taylor’s side. City’s towering centre forward Ryan bowman gliding past his defender before unleashing a powerful shot into the back of the net.

With their tails up and the momentum behind them city pilled on the pressure and pushed for the equaliser. The chances were coming frequently – but Exeter couldn’t capitalise and they paid the price.

The Grecians best chance to equalise came from Bowman - the centre forward had two headed chances in quick succession. His first header forced Glenn Morris into a superb save at his near post, his second went whiskers wide of the far post.

However, despite building the strong momentum, the visitors scored a third completely against the run of play. Camara won the ball on the half-way line and launched the attack – which ended with Grego-Cox putting the ball into the net for his second goal of the afternoon.

The Grecians had 20 minutes remaining to respond, but unfortunately, they couldn’t stage a famous comeback.