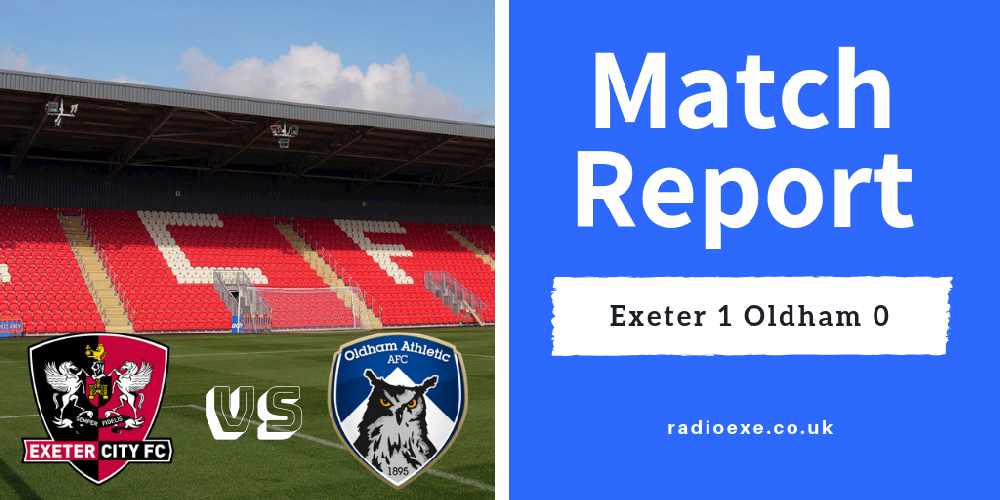 A second half goal from Ryan Bowman was enough to secure a significant three points in front of more than 5,000 fans at St James Park and keep City in the play-off mix.

The Grecians travel to fifth place Forest Green Rovers next weekend knowing only a win will secure promotion..

City’s manager Matt Taylor didn’t make any changes to the side that drew 1-1 against Stevenage on Monday.

The inform visitors, who’ve picked up 14 points from their last six games, pilled on the early pressure in a lively start to the paramount encounter. Inside the opening two minutes, Exeter’s Christy Pym dived to his left to push the ball around the post for a corner.

The resulting set piece came to nothing, however, city rapidly countered using the electric pace of Randell Williams. Unfortunately, the promising attack broke down after Nicky Law and Craig Woodman both had their shots well blocked from outside the box.

With 15 minutes on the clock, both sets of fans were on the edge of their seats. The Grecians failed to clear a dangerous bouncing ball into the heat of their box – and just five yards away from Pym’s goal - Callum Lang’s deflected effort went whiskers wide of the post.

Despite being under the cosh for large periods of the opening 45 minutes, Exeter had a glorious chance to take the lead through Jake Taylor with a rare shot at goal. The captain connected sweetly with a volley inside the box, but he directed it agonisingly wide of the post.

In the dying embers of the half Pym produced another superb one-handed stop to deny the opener. Oldham’s Mohamed Maouche dribbled 20 yards with the ball before unleashing a powerful effort towards the bottom corner. City’s saviour, Pym, got down well to stop the shot with his fingertips.

All square in blustery conditions here at St James Park. City have gone close through Jake Taylor and Nicky Law but Christy has made a couple of good saves too #ECFC pic.twitter.com/eXaQ1s2ss9

The second half began much like the first. Inside an action packed three minutes, it was chances galore – and the large majority of them were created by the hosts.

The first goal scoring opportunity fell to the red and whites. Hiram Boateng, who replaced Nicky Law near the end of the first-half, made a strong run skipping past a few Oldham defenders before eventually being brought down 30 yards out. However,  Boateng’s ambitious free-kick flew over the bar.

Seconds later, the city substitute caused more chaos and hit the post from five yards out. Pierce Sweeny whipped in a delightful ball for an unmarked Boateng, but the midfielder couldn’t direct his header on target.

Midway through the half Williams came close with a curling effort outside the box, Taylor had a good shot saved and Bowman was denied by the legs of the visitors goalkeeper just ten years out.

Exeter’s hard work eventually paid off. With 20 minutes to play, they broke the deadlock. It was a superb bit of skill from Lee Martin to create a yard of room for the cross, and what a cross It was too. He put it on a plate for Williams whose header was kept out by the keeper but Bowman pounced on the rebound and found the back of the net.

The red and whites held their nerve, and held onto the three points. It ended Exeter 1 Oldham 0.