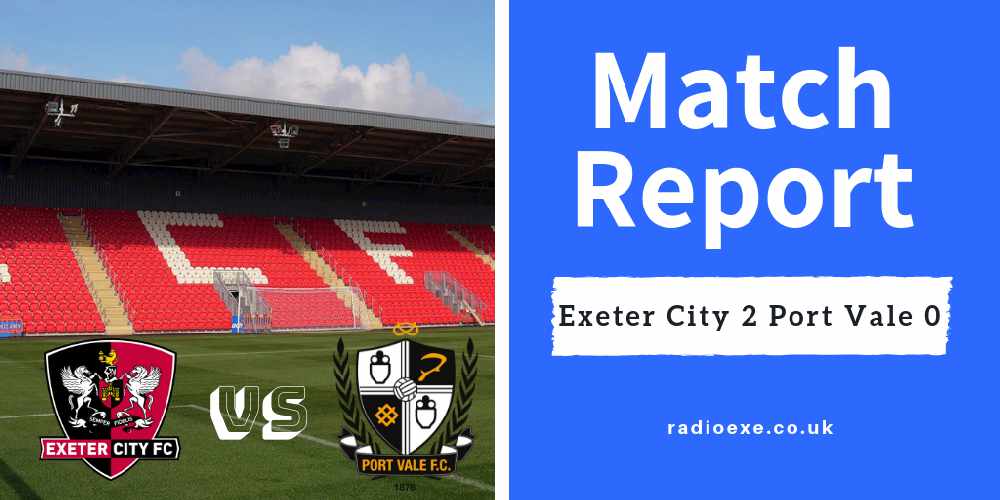 It’s likely to go down to the wire, but for the time being, Exeter City remain in the play-off places with a 2-0 victory against Port Vale at St James Park.

It was a much needed victory for Matt Taylor’s side having lost valuable points in a midweek defeat to bottom of the table Macclesfield.

Taylor made four changes to the side that lost against Macclesfield. Christy Pym, Dara O’Shea, Nicky Law and Lee Holmes all returned to the starting 11.

City couldn’t have wished for a better start - it took a matter of seconds for the hosts to find their stride and break the deadlock. With less than one minute on the clock Ryan Bowman was dragged to the floor inside the box and won his side a penalty. Nicky Law converted from the spot.

The early goal set the tone for the rest of the half. City looked dangerous, they dominated possession and chances, but couldn’t capitalise - mainly because of Port Vale’s goalkeeper, Scott Brown, who produced three fine saves to deny city from doubling their lead.

The closest city came to getting their second was though captain Jake Taylor – who’s headed effort was saved by the fingertips of Brown.

In the dying embers of the first-half City had a penalty shout turned down. It was Ryan Bowman who appealed for it having claimed a Port Vale defender used his hand to control the ball. But the referee, who dished out three yellow cards in the opening 45 minutes, didn’t give it.

The Grecians came out the blocks rapidly and caught the visitors napping. Seconds after kick-off, Bowman had the ball in the back of the net. But, to the anger of the home spectators in the Big Bank, his goal was ruled out for off-side.

However, 10 minutes into the second half, City’s dominance was finally rewarded with a majestic goal of the month contender from Hiram Boateng. The 23 year-old midfielder controlled the ball with his chest before volleying it into the top corner to give his side a well-deserved 2-0 lead.

For much of the second half City’s Christy Pym was a spectator. The Grecians did well to deny the visitors any clear cut chances in what was an all-round impressive display from the red and whites.

It was a standing ovation victory for the Grecians – who remain in the play-off places with just four games remaining the season. Up next, City are swiftly back in action. They welcome Crawley to St James Park on Friday night.

LEAGUE 2 TABLE, HOW IT STANDS: