As Washington Redskins review their name

Calls for Exeter Chiefs to drop their Native American branding have stepped up, days after a new petition launched to back the move.

Exeter Rugby Club adopted the name in 1999. From time to time since, some people have asked it to reconsider the use of icons they claim have been 'misappropriated' from the indigenous tribes of North America.

This week, the Washington Redskins, an American football team, says it's going to consider dropping similar iconography. They're under pressure from major investors and sponsors. Courier business FedEX, one of the team's high-profile sponsors, have asked for a name change. In turn, FedEX has been lobbied by its own shareholders and suppliers to withdraw support from the Redskins, where it has stadium naming-rights. Pepsi says it's been in negotiations with the Washington team too and welcome their promise to review its name. Nike and Bank of America say they're pleased the Redskins are considering the name.

Exeter Chiefs haven't commented about the petition organised by a group called Exeter Chiefs for Change, published on change.org, which is trying to attract 1,500 signatures after passing its original target of 1,000 in just four days. On Saturday morning, around 1,300 people had added their name to the campaign. It's been organised by someone who says they're a committed Chiefs fan. Exeter MP Ben Bradshaw has asked for the branding to be reconsidered too.

The organisers of the petition says: "The stylised Native American Chief on the club’s crest, the ‘Big Chief’ mascot, the headdresses and tomahawks adorning the supporters, and the ‘Tomahawk Chop’ chant are all examples of cultural appropriation of the Native American peoples who were all but wiped out by white European settlers and who still suffer extreme examples of racial prejudice today, across the world.

"The club doesn’t even need to change its name. Exeter Chiefs could refer to the Celtic Chiefs who inhabited the city and contributed to its rich and diverse history. It is the imagery that must change." They say the club can benefit from changing the branding from American imagery to British branding, without a name change, and earn money from rebranding and merchandising opportunities too.

Whilst avoiding the brand controversy, the Chiefs' attention this week has been moving to what's called stage two training, which means some physical contact is now allowed. Premiership Rugby, the league which the Chiefs currently top, hopes to resume on Friday 14 August. The Chiefs have also unveiled their new rugby shirts this week, complete with traditional image of a cartoon indigenous American. The shirts are made by Samuri, a British company based in Norfolk.

The letter sent to Exeter Rugby Club once the 1,000 signatures was surpassed is below: 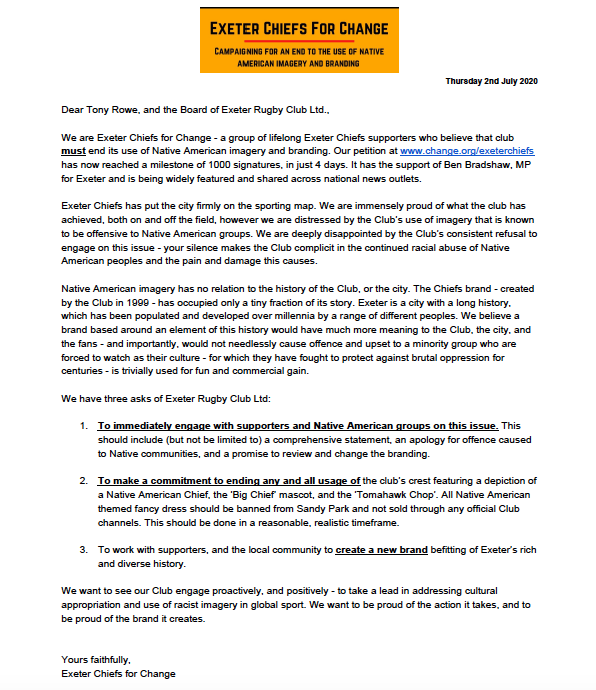