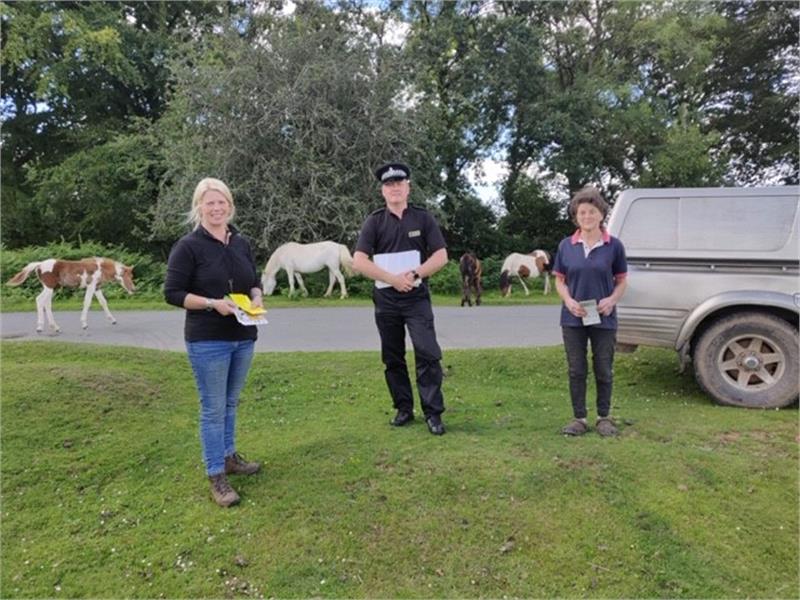 Partnership work on Dartmoor (those are not sheep in the background)

And the rate is increasing

Dogs attacked livestock on around 500 occasions in Devon and Cornwall in the last five years, according to new figures published by the region's police force, which says that farmers are also reporting year on year increases.

Dartmoor National Park is a Devon troublespot when it comes to dog attacks, with some of the highest number of reports to police in the county. Police believe that not all livestock attacks are reported, and the real figure may be much higher.

The Police rural crime team has been helping raise awareness in Okehampton and Tavistock. The police joined patrols with Dartmoor Park rangers, Dartmoor livestock protection officer and a representative of the Dartmoor Commoners Council at Meldon Reservoir, Belstone, the Army Camp, The Pimple, Plaister Down, Roborough Down, Longash Airfield, Porkhill and Westdown to speak to people visiting the area and farmers about the problem and offering advice on how to reduce it.

Livestock worrying around sheep is nothing new and the after-effects of attacks (often too distressing to show in photographs) have been raised regularly. Both the National Farmers Union and National Sheep Association have drawn attention to the problem. The NFU provided figures in 2018 that in four years farmed animals worth £1 million had been killed or injured by dogs.

Sergeant Nathan Walker, based in Okehampton said: “Livestock worrying is a national crime priority.  The West Devon neighbourhood policing team, along our local partners on Dartmoor, were happy to be out encouraging the safe use of the moor. We urge people to keep their dogs under close control when walking near livestock.”

Dartmoor Livestock Protection Officer - Karla Mckechnie added: “Having a dog is a massive responsibility which is further increased when you bring your dog to Dartmoor. Farmers have witnessed and suffered the consequences of out of control dogs over the years and we are asking dog owners to keep their dogs under control and take the necessary steps in ensuring their dogs are trained and kept on leads around livestock at all times.”

Devon & Cornwall Police Rural Crime Officer, PC Martin Beck said: “Responsible dog walkers keep their dogs under close control and, when near sheep, on a lead. What you may think is your dog playing with sheep could be livestock worrying and a criminal offence. We hope with the help of dog walkers and local people we can reduce the number of attacks.”

Dartmoor National Park Ranger, Ian Brooker added: “It is time to remind people about the importance of controlling dogs on the moor so we don’t have livestock and ground nesting birds harmed. There is some important information about this on our web site and other information about making your visit to the park safe and enjoyable www.dartmoor.gov.uk.”

For more information visit: www.dc.police.uk/livestockworrying. If you have information about a dog which chases or attacks livestock please report to police by emailing 101@dc.police.uk or by passing information to Crime Stoppers 0800 555111.