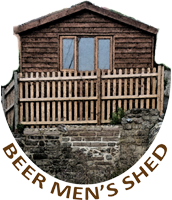 A £20,000 expansion to grow a community project that provides workshops and team activities, helping residents around Beer to improve their skills, finally has the funds it needs.

The Beer Men’s Shed project has been successful in getting men from Beer and surrounding areas into its workshop to undertake projects that help the local community.

The group helps members to feel useful in the community, increasing their sense of self-worth while also making new friends and dealing with loneliness and isolation.

Beer Men’s Shed already has one building, but as a result of the increase in members it is now far too small for the number of men that want to join  and is not very accessible for people with mobility issues.

A crowdfunding campaign to allow them to construct a second building hit its target after East Devon District Council put £6,500 towards the goal, campaign. Devon County Council contributed £1,000.

Chris Pickles, from Beer Men’s Shed, said: “The increasing number of men who want to join in a Men’s Shed, together with the impact of lockdowns and self-isolation, mean that there has never been a time when we needed Men’s Sheds more than now.

“Our crowdfunder campaign and the great support from EDDC and DCC mean that we can now build a much bigger shed where more men can join in, use equipment safely and still stay socially distanced.”

Cllr Jack Rowland, chair of the EDDC’s community grants panel, said: “In these difficult times the success of what has been achieved since they first set up is evidenced by needing additional space to cater for the demand that has helped so many individuals and made contributions in their output to many communities in the locality, not just in Beer. What they have achieved is to be applauded and wish them every continued success.”

Cllr Roger Croad, DCC’s cabinet member for communities, added: “Crowdfunding encourages communities to work together to identify new ideas for their mutual benefit. It is projects like the Men’s Shed that will be instrumental in helping communities reconnect once the pandemic is over.”

EDDC ward member for Beer, Cllr Geoff Pook added: “As EDDC councillor for Beer I am very pleased that EDDC has made this grant to Beer Men’s Shed. The men’s shed has made a significant impact in Beer supporting local causes and  projects through their works but most of all giving men, not just from Beer but the wider area, the opportunity and place to get together, work and socialise.

“It’s a great organisation and congratulations and thanks should go to Chris Pickles who has been the driving force behind it from the start.”