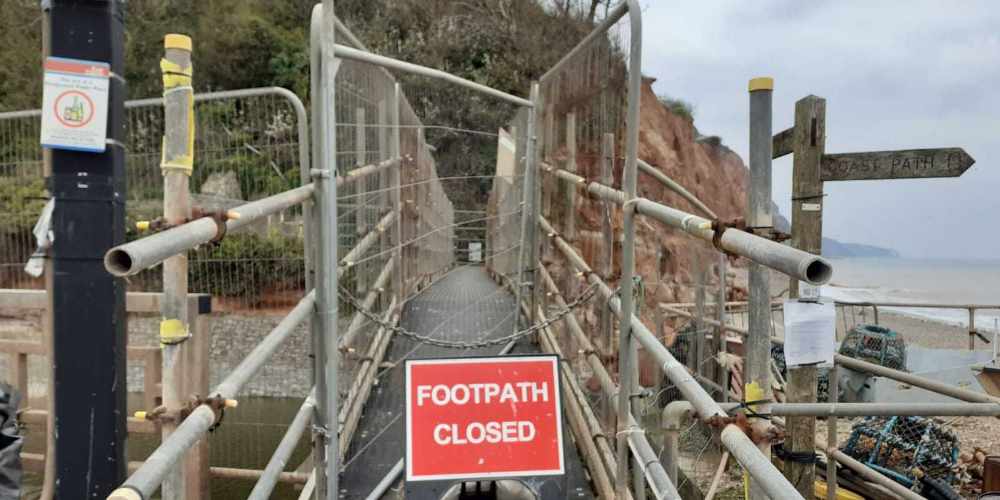 A bridge that allows access to Sidmouth’s East Beach which has been hit with unprecedented amounts of cliff falls this year has been sealed off.

The original Alma Bridge in Sidmouth was still open to the public to use as an emergency exit on and off the beach around Pennington Point.

A new bridge is currently under construction 40m upstream and was due to be finished by the end of Spring 2020, although work the coronavirus outbreak has seen work paused.

Once finished, it will replace the Alma Bridge, which was designed by architect RW Sampson in the early 1900s. The new bridge will also include relatively short sections of ramp, matching the gradients of the existing but shut Hanger Path, to allow access to the seafront for residents east of the town.

Cllr Stuart Hughes, Devon County Council’s cabinet member for highways, and who also represents the Sidmouth ward, said that the old bridge has now been sealed off.

He added: “The Alma Bridge is now completely secured and closed off and preventing any access to East Beach which is seeing unprecedented amount of cliff falls this year.”

Signs have been placed in front of the old bridge and fencing erected to block any access to the steps leading to the beach,  and a sign saying: “Danger. Unstable Cliffs Rock Falls” was already displayed by the cliffs in an attempt to stop people from walking on the beach.

Large chunks of the cliff at Pennington Point on the town’s East Beach have given way this month in a series of separate collapses.

Plans are being developed to try and protect the cliffs and the town, with the preferred beach management scheme consisting of adding a new rock groyne on East Beach and importing new shingle onto Sidmouth Beach, as well as increasing the height of the splash wall on the seafront.

Costs for construction of the scheme are estimated at £8.9million, with around £1 million still needed to be found.