Calls to create 'Transport for Devon' 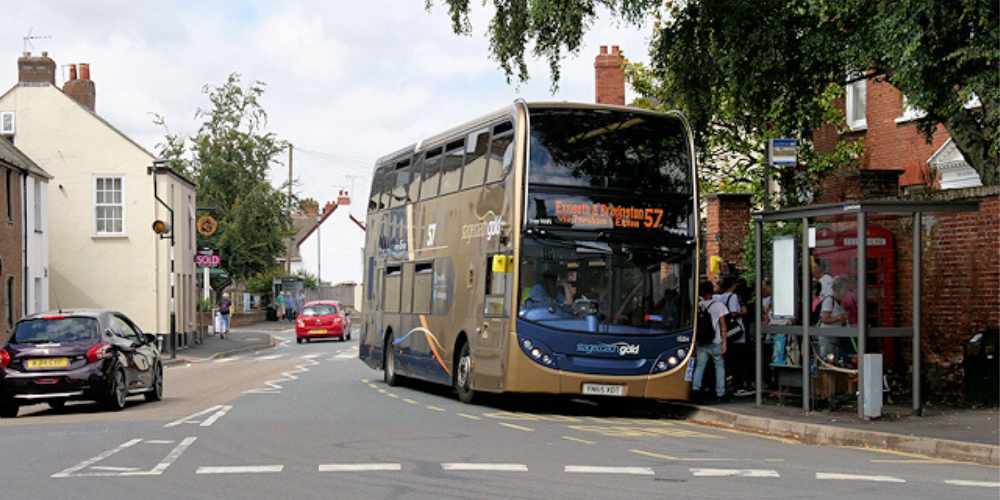 Devon is getting less subsidy for bus services than it hoped

Calls have been made to look at creating a ‘Transport for Devon’ organisation to improve the county’s under-fire bus services.

Teignbridge District Council’s executive agreed a motion to go to its full council next month, after members criticised the reduced number of buses now running in the area.

It comes amid turbulent times for bus operators in the county, with Exeter’s highways committee recently describing their Stagecoach-dominated service in the city as “not fit for purpose.”

Cancellations and reduced timetables have been blamed on a lack of drivers and a drop in passengers compared to pre-pandemic levels.

Devon County Council heard in April that it would only receive £14 million towards bus improvements as part of the government’s ‘bus back better’ programme – less than half the amount it originally bid for.

Teignbridge executive group wants the county council to “urgently explore options for a ‘Transport for Devon’ organisation to improve public transport and through ticketing, and to reduce costs.”

Councillor Alison Foden, who is behind the motion, asked if Devon could push for more transport powers in its ongoing devolution discussions with the government, to enable the county to emulate the Transport for Cornwall service across the Tamar.

By contrast, an unlimited day ticket on most bus companies in Devon currently costs £9.60 – almost twice as much as Cornwall’s bus service.

The county council says the future management of Devon’s bus services will be considered by its ruling cabinet on Wednesday 13 July, when it will also consider the funding allocation from the government’s national bus strategy.

Cllr Foden (Lib Dem, Kenn Valley), who gave up her car last year, said there had been “lots of cuts to services” since the start of April, including the number two Stagecoach bus which serves Newton Abbot to Exeter via coastal towns.

“When I first started working in Exeter back in the year 2000, there were four buses an hour every 15 minutes. That has now been cut, time and again, down to every two buses an hour if you’re lucky. And now with these latest cuts even rarer, particularly at weekends and evenings,” she said.

Her motion asks that, at the first opportunity, “every effort be made to increase the frequency of services from Exeter to Newton Abbot via Exminster, Dawlish, and Teignmouth, including every 20 minutes or adding express routes during peak times.”

It also requests an increase in the frequency of services between Dawlish Warren and Teignmouth during the holiday season when possible.

In response, the county council said it had been their “aspiration” to increase the frequency of services from Exeter to Newton Abbot as part of their bus improvement plan, but it “did not receive the level of funding to implement it.”

“To increase the service to every 20 minutes requires four additional buses, which at today’s costs would be around £600,000 per year, assuming the extra drivers required are available,” it explained.

“We had also planned to improve the direct Newton Abbot to Exeter service to half-hourly – at a cost of £300,000. However, we do not have the funding to currently implement these improvements.”

A spokesperson for Stagecoach South West said: “Our Service 222 is now operating with open top double decker buses, providing additional capacity along the coast between Dawlish Warren and Teignmouth.”

During the meeting, other councillors also spoke about the impact of bus cuts on their communities.

Cllr Richard Keeling (Lib Dem, Chudleigh) said: “We’ve seen a reduction in the bus services from the town out to important workplaces for most of my residents in Exeter and Plymouth.

Cllr Nina Jeffries (Lib Dem, Teignmouth West) added: “My concerns for communities, with this being reduced, is that people won’t be able to get to work. They won’t be able to get home in time for their childcare. Young people who are relying on these bus services to get to college are going to be stranded coming back, and we’re already seeing that.

“But it has a knock-on impact, I think, for further marginalising communities that are really reliant on low-cost transport.”

In response to the motion, Councillor Andrea Davis (Conservative, Combe Martin Rural), the county council’s cabinet member for transport, said in a statement: “The Bus Service Improvement Plan (BSIP) funding we received from government unfortunately fell short of what we had been hoping for, but we have to remember that a lot of authorities, including some neighbouring councils, have had to go without.

“Our priorities over the coming months are to maintain the existing network as much as possible in light of operational difficulties faced by bus companies, the rising costs of providing transport and the need to encourage more people back on public transport.”

A county council spokesperson added it is “committed to supporting public transport and looks at funding opportunities to improve services wherever possible.”

“Where new developments are planned, as planning authorities district councils need to consider investment from developers to support improvements in public transport. We know that where bus and train services are in place early, for example at Cranbrook, people are more likely to use sustainable transport options.”

A spokesperson for Stagecoach South West said: “We have made a number of service changes in recent months and have some further changes planned for the coming months to ensure we can operate a level of service that meets current demand and ensures we have sufficient resource available to operate our planned services.

It said since operating service 360 – from Exeter to Bridford in the Teign Valley – it has “made available our range of network tickets to give customers more choice and flexibility.”

“We look forward to welcoming more customers back onto our services and ensuring we offer a network of services and range of fares and tickets that our customers will welcome.”