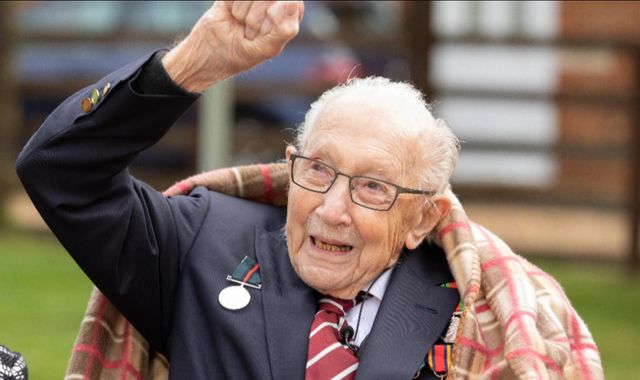 Second World War veteran Captain Sir Tom Moore, who inspired the nation in lockdown by raising millions for the NHS, has died aged 100, his family says.

Captain Sir Tom was taken to Bedford Hospital on Sunday after being treated for pneumonia for some time and testing positive for coronavirus last week.

He became a national treasure and a household name after raising more than £32m for the health service by walking 100 laps of his garden with his zimmer frame - and was knighted for his fundraising efforts by the Queen at Windsor Castle last July.

In a statement, his daughters Hannah and Lucy said: "It is with great sadness that we announce the death of our dear father, Captain Sir Tom Moore.

"We are so grateful that we were with him during the last hours of his life; Hannah, Benjie and Georgia by his bedside and Lucy on FaceTime. We spent hours chatting to him, reminiscing about our childhood and our wonderful mother. We shared laughter and tears together.

"The last year of our father's life was nothing short of remarkable. He was rejuvenated and experienced things he'd only ever dreamed of."

A Buckingham Palace spokesperson said: "The Queen is sending a private message of condolence to the family of Captain Sir Tom Moore. Her Majesty very much enjoyed meeting Cpt Sir Tom and his family at Windsor last year.

"Her thoughts, and those of the Royal Family, are with them, recognising the inspiration he provided for the whole nation and others across the world."

Ruth May, chief nursing officer for England, said Captain Sir Tom gave the country a "boost when we most needed it".

She said: "On behalf of everyone in the NHS, I want to pay tribute to Captain Sir Tom Moore who has been the model of all that has been good about our country's response to COVID-19.

"People rightly marvel at the tens of millions of pounds Captain Sir Tom raised for the NHS.

"But for me his biggest achievement and most important contribution to helping my fellow nurses, doctors and all those in the NHS responding to coronavirus, has been how he brought the country together and gave us all a boost when we most needed it.

"I also want to echo the thanks of Hannah and Lucy to my colleagues who have cared for Captain Sir Tom in his final days, and I am proud that the NHS was able to offer Captain Sir Tom and his family compassion, skill and dedication when they most needed it."

"We share our deepest condolences and sympathies with his family and loved ones at this incredibly sad time. We'd also like to say thank you, and pay tribute to Captain Sir Tom Moore for the remarkable contribution he has made to the NHS."

The charitable foundation that he launched in September said: "We are heartbroken by the passing of our founder and inspiration Captain Sir Tom Moore.

"As well as uniting the nation and giving hope when it was needed most he has been our beacon of light every single day.

"He was so passionate about the foundation's vision for a more hopeful world and equal society and was immensely proud of the growing legacy it was establishing in his name."

Thomas Moore was born on 30 April 1920 in Keighley, West Yorkshire.

He attended grammar school and got an apprenticeship in civil engineering before war broke out in 1939 when he was 19.

The teenager enlisted in the 8th Battalion, Duke of Wellington's Regiment and was stationed hundreds of miles away from his home in Cornwall.

He was selected for officer training in 1940 and was commissioned as a second lieutenant in June 1941.

In October that year he became a member of the Royal Armoured Corps and was transferred to the 9th Battalion in India, where he spent time in both Mumbai and Kolkata and took part in the Battle of Ramree Island.

His military career continued to progress during the war, with promotions to war-lieutenant in 1942 and captain in 1944.

He was posted to Arakan in Western Myanmar and later to Sumatra after Japan surrendered.

On his return to the UK he worked as an instructor at the Armoured Fighting Vehicle School in Bovington, Dorset.

After his first marriage, Captain Sir Tom married his wife Pamela in January 1968.

They went on to have two daughters Lucy and Hannah, who they raised in Welney, Norfolk.

In later life the couple retired to the Costa del Sol in Spain, but had to return to the UK when Pamela was diagnosed with dementia and moved to a nursing home. She died in 2006.

Two years later he moved in with his daughter Hannah, her husband and two of his grandchildren in Bedfordshire.

Despite his impressive military credentials, it wasn't until the final year of his life that he became a household name.

Described as a "national hero" and an "inspiration to us all", he first made headlines on 6 April 2020, a fortnight after the first UK lockdown.

But within a few days, he had captured the hearts of the nation and far succeeded his original target, getting to £20m two days before his birthday.

On 30 April he celebrated the milestone birthday by completing his final lap at home in Bedfordshire having raised more than £30m for NHS Charities Together.

His efforts were rewarded with a military flypast, the title of honorary colonel, messages from the Queen, prime minister and thousands of birthday cards from well-wishers all over the country.

He said at the time: "When we started off with this exercise, we didn't anticipate we'd get anything near that sort of money. It's really amazing."

"We're a little bit like having a war at the moment," he said.

"But the doctors and the nurses, they're all on the front line, and all of us behind, we've got to supply them and keep them going with everything that they need, so that they can do their jobs even better than they're doing now."

Soon after he completed his walk, he featured on a cover version of You'll Never Walk Alone with Michael Ball, which topped the charts and made him the oldest person in the UK to ever have a number one single.

In July, he was knighted by the Queen at a special outdoor, socially distant ceremony at Windsor Castle.

Her Majesty, 94, and six years Sir Tom's junior, used a sword that belonged to her father George VI.

She was overheard saying to the centenarian: "Thank you so much, an amazing amount of money you raised."

"One hundred is a great age," she added.

With a second national lockdown imposed in November, the foundation launched a Walk and Talk with Captain Tom campaign to spread hope and tackle loneliness during the pandemic.

The centenarian said as England locked down again: "I would like us all to stand shoulder to shoulder - metaphorically!

"Let's try not to get downhearted, we will get through this, whatever is thrown at us and together we can ensure that tomorrow will be a good day."

In December he and his family were gifted a holiday to Barbados by British Airways.

"I never thought that, at the age of 100, I would get to travel again. I'm so grateful to everyone who has made this possible," he wrote on Twitter.

"The support I have been shown in 2020 has given me renewed energy and today I get to tick something off my bucket list."

An image of him also featured in the New Year's Eve firework display in central London.

On 31 January his family reported he had been taken to hospital after testing positive for COVID-19 the week before.

Despite being over 80, he was not given a vaccine because he was receiving treatment for pneumonia, which could put him at risk.

He was taken to Bedford Hospital for help with his breathing.

Captain Sir Tom Moore is survived by his two daughters and four grandchildren.