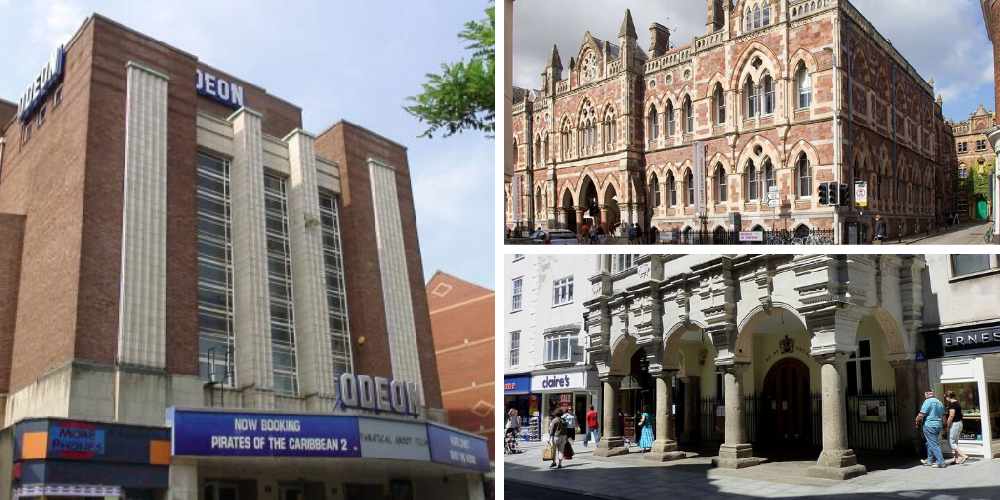 Following new advice from the Government on Monday 17th March, Exeter City Council says the following facilities are closed to the public.

It is yet to make a decision about leisure centres like Pyramids and Riverside. But says this summer’s Exeter Festival in Northernhay Gardens, from 3rd-5th July, and the planned VE DAY 75th Celebration in the city centre, on 8th May, have both been cancelled.

The Royal Devon and Exeter Hospital says all non-essential outpatient appointments are likely to be stood down over the next few days, to comply with the Government's new approach. Anyone who requires urgent care or who is on a "cancer pathway" should continue to attend their appointment today, unless contacted by their hospital. .

Libraries across Devon will close until further notice from Friday evening (20 March).

The University of Exeter has suspended all teaching until the end of the week. It will then become online-only. Schools across the UK will close to all pupils except those of key workers from tomorrow [Friday 20th]. Some schools are already partially closed because of staff shortages, but they will contact parents directly.

The Northcott Theatre has closed until further notice and asked customers to bear with them at this "unprecedented time".

Some shops in Exeter have taken the decision to close, including Urban Outfitters and the Apple Store in Princesshay.

Andy's Man Club took the decision to close all their Monday night groups in Exeter, Newton Abbot, Torbay and Plymouth until 3rd April. The organisation says men can still engage with the groups using social media, which Andy's Man Club will keep up to date with any developments.

Exeter's Mosque and Cultural Centre is also closed. In a post on Facebook, they said: "The Imams, Management and Trustees are taking decisive action to close Exeter Mosque with immediate effect (00:00hours, 17.3.2020) until there is an improvement in public health and the threat of the coronavirus (COVID-19) diminishes."

Exeter Harriers have cancelled training nights on Tuesdays and Thursdays until further notice.

David Rowland's Fun Fair which was at Exeter Arena has closed.

Odeon say they have closed all cinemas, including in Exeter.

An important message from ODEON pic.twitter.com/tlgnL5FS84

Exeter Picturehouse and The Vue are also closed.

The Exeter Phoenix on Gandy Street said in a post on Facebook it is closed to the public until further notice, while the Barnfield Theatre is also shut with immediate effect.

The Devon County Show, along with the Royal Cornwall and the Bath and West have been postponed.

It's now hoped they will take place on the following dates:

Crealy Theme Park is closed, as is The Milky Way in North Devon.

Red Coat tours in Exeter have also now been stopped until further notice.

FORCE Cancer Charity has announced the temporary closure of its Support and Information Centre in Exeter. But it will continue to offer telephone and video call support to local people affected by cancer.

All park runs, including Exeter have been called off.

You can read more here
👉🏾https://t.co/OkmVtZAgKW

The Church of England has suspended all worship. You can find more information here.

Budleigh Salterton Literary Festival has cancelled upcoming events on 20th April and 1st May. All ticket holders will be refunded in full. For tickets purchased online, the refund will be automatic to the card you paid with.

A number of events have been cancelled including Ten Tors, Brixfest,Sidmouth Literary Fest.

Exeter Pride has been cancelled until September.

Rockfish has closed all Devon restaurants.

Paington Zoo and Living Coasts will close on Monday 23rd March. The charity running the attractions said it had hoped to carry on, but felt it was the responsible thing to do.

If you know of further disruption, let us know: news@radioexe.co.uk