Councillors back £300m development in Exeter 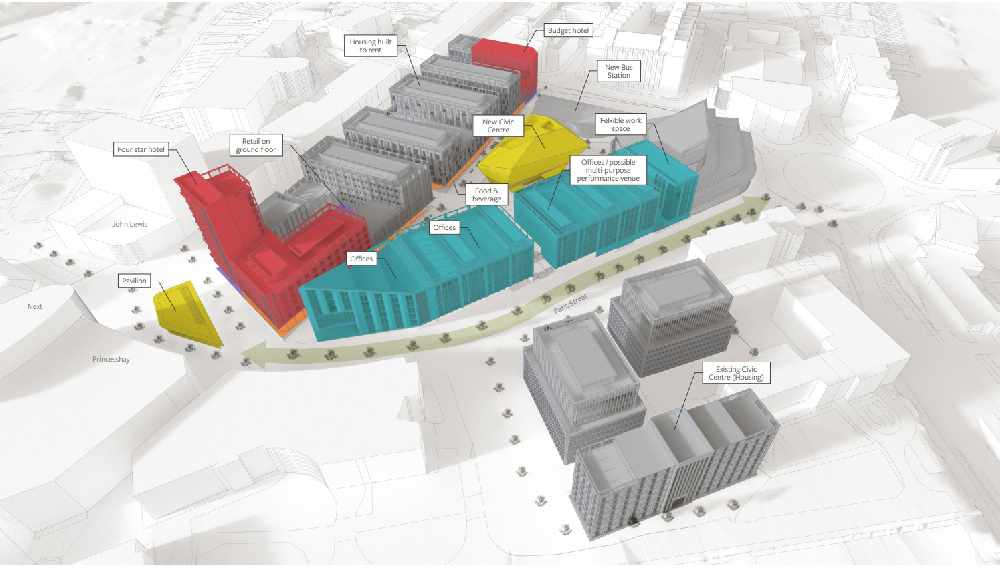 "CityPoint" will be on Paris Street.

Exeter City Council’s executive last night (Tuesday 10th September) unanimously agreed that the latest progress on the scheme be noted and to negotiate and enter into a joint ownership and land promotion agreement with the other main land owners on the site.

But they were warned by Karime Hassan, the council’s chief executive, that while this was the most successful way to bring forward the redevelopment of the whole site, it did run the risk that if one landowner or player pulled out then it could scupper the whole scheme.

Speaking at Tuesday night’s meeting, council director David Bartram told councillors that the most successful way to bring forward the redevelopment of the site was with a joint land promotion agreement with the other main land owners on the site which will facilitate progress as expediently as possible and follows extensive research towards the strategic needs of the city.

Cllr Kevin Mitchell, leader of the Progressive Group, asked if there were any downsides or risks to this arrangement.

Mr Hassan said that they had considered the alternative for delivery of either disposal of our property interests or acquisition of all third party holdings.

The former would restrict the ability to direct the project whilst the latter has been assessed as financially unsustainable, so a collaborative approach is felt to give the best opportunity to secure regeneration, generate valuable income streams and avoid protracted negotiations with third parties.

He added: “The advantage of this way is a comprehensive scheme can be delivered and bringing in the key other land owners makes the scheme more deliverable.

“The downside is that we are putting all the eggs in one basket, so if for whatever reason one player decides they don’t want to pursue it, then back where we were with the Crown Estate when they pulled out. We are confident that this can be delivered in the marketplace.

Cllr David Harvey said how pleased he says that this would go forward. He added: “From the ashes of despair a couple of years ago, we managed to find a way forward and the citizens with be the recipients of yet more good work from the council.”

Leader of the council, Cllr Phil Bialyk, added: “We have been responding to a constant stream of enquiries from interested developers, occupiers, investors, contractors and property agents following the extensive media coverage of the development proposals at the end of last year.

“We are now in a position to take the next steps in bringing forward the wider site for regeneration and will be working closely with our partners to pool property interests and jointly promote the development proposition.

“This is visionary and it has a lot going for it. It is important that we look at our city centre as many are struggling.”

The regeneration scheme could include 250 build-to-rent homes on Sidwell Street, a four star hotel opposite John Lewis, a budget hotel in Sidwell Street, the relocation of the Civic Centre into a new public sector hub, housing to replace the existing civic centre, a new office quarter, food, drink and retail outlets, a new square and civic space in Paris Street, and the potential for a multi-purpose performance venue, with a capacity of around 1,200 seated or up to 2,500 standing.

It would sit next to the redevelopment of the Bus Station as well as the new St SIdwell’s Point Leisure Centre, set to open early in 2021.

The recommendations were unanimously agreed by the executive.