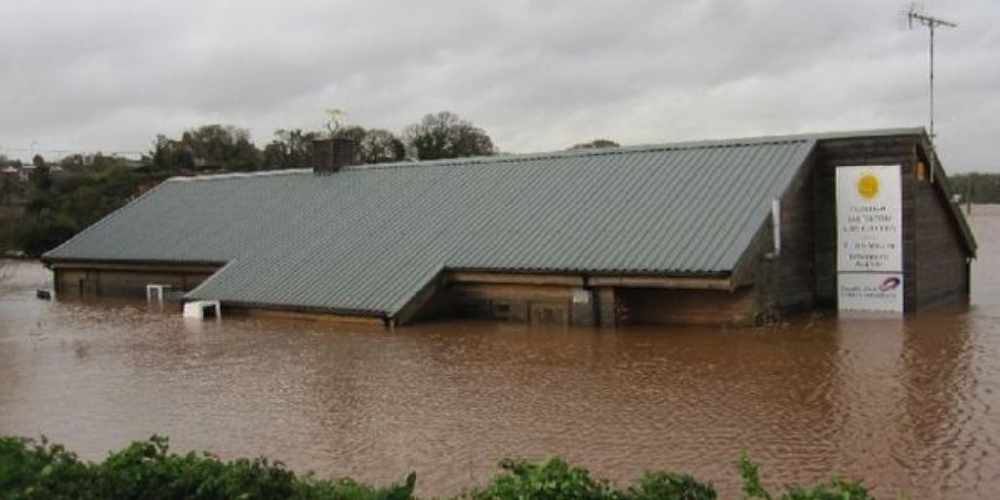 Budleigh Salterton Cricket Club are set to relocate after nearly a 100 years at their Ottermouth home.

The club hope to move to Janie’s Field on the outskirts of the town, as their current  home will be lost as part of a £9m scheme to help restore the River Otter and to help avoid a ‘catastrophic breach’ of the failing 200-year-old sea defences.

The Lower Otter Restoration Project is investigating the possibility of restoring the estuary to a more natural state, reducing the impact of climate change while creating new habitats for wildlife and improving water quality.

Details with a planning application, submitted this week to East Devon District Council, state that while it is important a new site is found so that the wider Lower Otter Restoration Project can proceed, there is a strong need for the cricket club to find a new home due to the longstanding and increasing incidents of flooding at the ground.

Floods have left part of their current home under water on three occasions in the last 10 years.

If the change of use plans are approved, the club could be playing at their new home in time for the 2022 season.

The main cricket square would include 13 wickets, one of which would be an artificial surface, and the project has been designed to meet the requirements of both the club and the ECB

The 3.5-hectare site, on land north of South Farm Cottages, is currently largely agricultural land on the northern edge of the town off the B3178 East Budleigh Road.

A statement with the planning application says: “By securing the long term future of the cricket club, it is considered the scheme represents a net improvement in sporting facilities in the area.

“However, the scheme goes beyond a solely ‘like-for-like’ replacement by proposing a range of additional improvements, including a purpose-built junior cricket pitch and additional changing facilities. The pavilion has also been designed to optimise its potential use for appropriate small-scale social events that will help support the club by increasing its revenue.

“There is a clear and demonstrable need for the proposed scheme and this is an important material consideration in support of the development.”

The proposed location at Janie’s Field was chosen as the site is available and deliverable, and have the space requirements to accommodate a main and junior cricket pitch.

Greg Evans, chairman of Budleigh Salterton Cricket Club, had previously added: “Everyone in the area knows that for years we have faced problems with flooding at Ottermouth, so we would very much welcome a solution which would mean we could use our facilities year-round.

“We have worked closely with Clinton Devon Estates on the latest proposals which would provide us with a much more sustainable home, as well as improved facilities for all at our club.

“However, we do understand that these proposals are closely linked to the Lower Otter Restoration Project which will need separate planning permission and other consents further down the line in order to make progress.

“Should everything go to plan with this proposal and the wider Lower Otter Restoration Project, we’re looking forward to being able to move in for the start of the 2022 season. This would obviously mark a big change for the cricket club, having played at Ottermouth since the 1930s – but it is one that would give us certainty and a facility that could benefit the local community all year round.”

Last year, the Environment Agency confirmed its commitment to the Lower Otter Restoration Project while applications for funding grants are made, meaning work to manage the estuary can press ahead and avoid delays on delivering the scheme.

The preferred option, for the project, led by landowner Clinton Devon Estates and the Environment Agency, would see the Big and Little Marsh floodplain restored.

It would cost between £8 million and £9 million, and breaches would be created in the Little Bank, the Big Bank and the River Otter Embankment, allowing water to flow through.

It secures and improves access to the South West Coast Path, protect the old municipal tip which lies in the floodplain from erosion, while also providing new benefits for both nature and the public, which are all key aims of the project.

East Devon District Council will determine the fate of the change of use application for the cricket club’s new home at a later date.