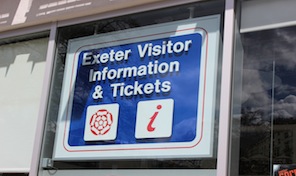 Plymouth, but not Exeter, is in top 10

Cornwall has beaten Devon, and Plymouth has thrashed Exeter as a half-term holiday destination, according to a 'holiday index' published by a budget hotel chain.

Travelodge, which has 10 properties in Devon including one at Exeter Services at junction 30 of the M5 - presumably for people to stay on the way to Cornwall - places Devon fourth in the October half-term holiday league. Plymouth is tenth in the country for city breaks, whilst Devon's capital city Exeter isn't even placed.

Travelodge says: "This year, families are opting for a 'minication' of three nights away rather than a week away during October half term. Most households are also choosing to holiday within a radius of 138 miles radius from home. With parents spending on average £356 on their Minication and an additional £131.83 on activities, Devon is set to receive a multi-million boost this October half term.