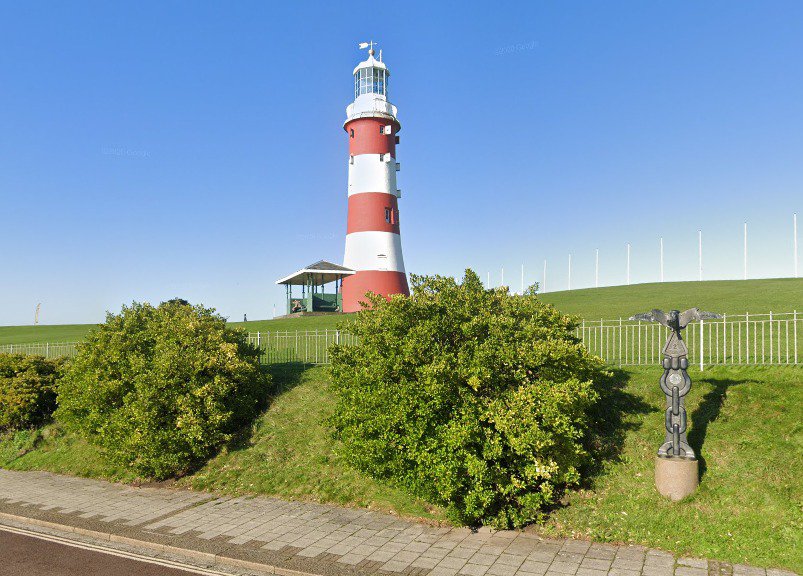 You'll have to climb to top to see Smeaton

The red and white striped Smeaton’s Tower on Plymouth Hoe is one of Devon’s best known landmarks. The 73ft granite former lighthouse was closed to the public for repainting in the winter of 2019 and has stayed shut due to the pandemic.

When people are finally allowed back in to climb the 93 steps to the lantern chamber at the top, they will come face to face again with the engineer John Smeaton who built the structure on the Eddystone Reef, 14 miles off Plymouth.

A new bust of Smeaton, carved in Cornish granite by sculptor Philip Chatfield who has close links with Plymouth and survived a shipwreck off the Cornish coast, was installed at the top of the tower a year ago, but plans for the unveiling have been delayed. It was commissioned by Plymouth City Museum and Art Gallery and funded by the Corporation of Trinity House, the charity which still runs lighthouses around the UK.

Due to the narrowness of the internal stairway, the 18 stone block was winched to the top of the tower using the scaffolding in place for the painting, with help from a group of a dozen Royal Marines from 131 Commando, Royal Engineers. The extra costs of the installation were funded by the Friends of Plymouth City Museum and Art Gallery.

The new bust is based on a plaster one donated by the Institution of Civil Engineers in about 1980. It was kept in a glass case in the chamber but had to be removed for safety reasons more than 20 years ago.

Mr Chatfield grew up in Plymouth and the story of the Smeaton and his lighthouse helped to inspire an interest in maritime architecture and sculpture. He came up with the idea to carve a new bust of the builder when he returned to the tower years later and saw the empty plinth.

Smeaton’s Tower on the treacherous Eddystone Reef, 14 miles south-west of Plymouth, was the third to be built to warn shipping about the rocks. It was the first stone-built and fire-proof version, and was important due its pioneering design and building techniques.

The first lighthouse at Eddystone was made of wood and was lit in 1698. It was later substantially rebuilt then swept away in a storm in 1703, with the loss of the architect Henry Winstanley and five other men.

The second burned down after almost 50 years, claiming the life of one of the three keepers, who was aged 94. It was replaced by Smeaton’s which went into service when its 24 candles were lit in October 1759. His tower carried on in use for more than a century, before being replaced in May 1882 by a fourth which is still in service. 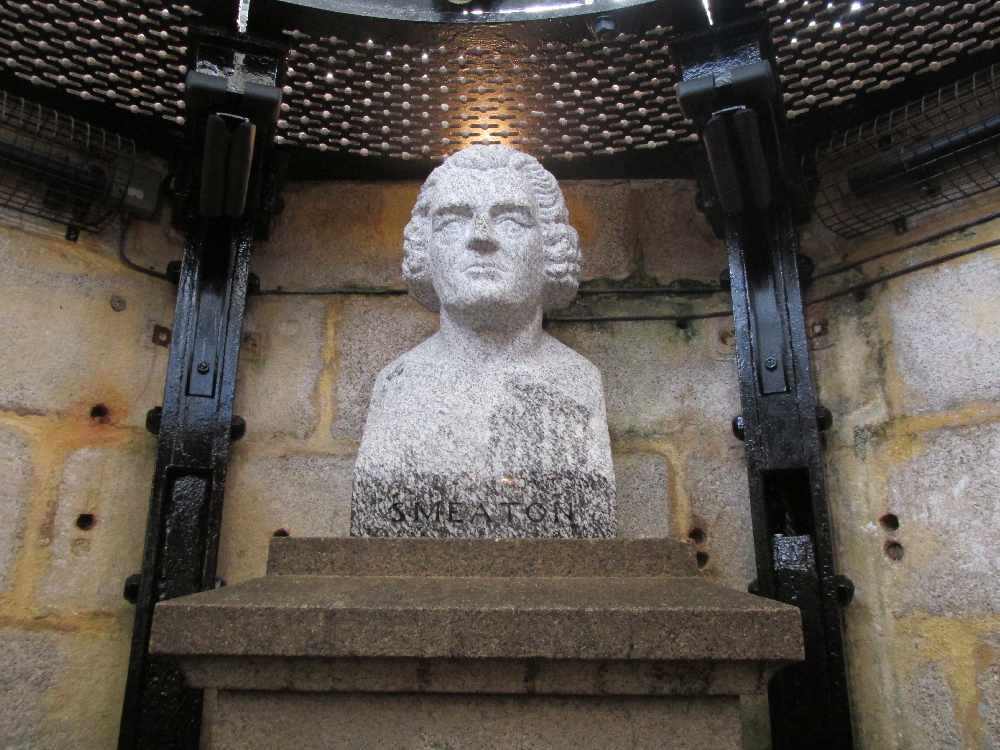 Smeaton started work on the granite blocks to build the tower in a yard at Millbay in 1756. He modelled the design on an oak tree and rediscovered hydraulic lime, first used by the Romans, which sets underwater to create a type of concrete later widely used in construction projects.

The lighthouse was eventually dismantled apart from its base due to the erosion of rock where it stood. It was transported to Plymouth Hoe where it was rebuilt and is an iconic image of the city.

Mr Chatfield’s father was a Royal Marine and the family lived in Plymouth in the 1960s. He regularly visited Smeaton’s Tower on the Hoe and developed an interest in ships and sailing. The family lived for a time in a house built on the site of the stone workshops in the former Eddystone yard used by Smeaton at Millbay, and Mr Chatfield watched Trinity House light ships which came in to the docks for maintenance.

The sculptor is now based in Gower, near Swansea in South Wales, and much of his work has maritime links including the Merchant Navy Memorial at Swansea and the Maria Asumpta Memorial at St Enodoc’s Church at Trebetherick on the north coast of Cornwall. Mr Chatfield was a member of the ship’s crew and survived the 1995 wreck of what was the world’s oldest surviving sailing vessel still in use, which claimed three lives.

The granite block for the bust of Smeaton was donated by Tim Marsh of Trenoweth Quarry, near Falmouth, close to the source of the rock used by Smeaton. Mr Chatfield carved the block in his workshop, and it was completed on October 16 2019, exactly 260 years after the lighthouse was first lit.

The 62-year-old sculptor said the project completed a cycle of events dating back to 1965, when his family moved to Plymouth from Malta as his father Major John Chatfield was a senior officer with 3 Commando Brigade, based at Stonehouse Barracks.

Mr Chatfield said he recalled as a boy watching the ships at Millbay Docks, and seeing Sir Francis Chichester arrive in Plymouth at the end of the first single-handed round the world voyage by the clipper route. He went sailing with his father, including to the Eddystone Reef.

Mr Chatfield said: “I always remember the first time I went up Smeaton’s Tower on the Hoe, and seeing the bust of Smeaton on the plinth made of plaster in a glass case in the lantern chamber.

“Many years later I went up there with my son, and saw the empty plinth. I thought, this is an opportunity to do what I do, and venerate Smeaton himself.”

Mr Chatfield contacted Plymouth City Council museums service, which welcomed the idea but could not fund it. He then contacted Trinity House which offered a grant.

The sculptor added: “It is a circular thing – to carve a bust of Smeaton, from the same granite that the lighthouse was made of. I’m sure he would have been proud that his work is remembered today, and that he is being remembered in granite.

“That is the joy I get out of it, connecting with him, although I was born something like 200 years after the lighthouse was constructed.”

Mr Chatfield’s childhood home was at the Longroom at Stonehouse, known as No. Residence, or Emma’s Cottage. He attended Montpelier School off Outland Road, near the former home of Captain Robert Falcon Scott, a Royal Navy officer and explorer who died with four others on an expedition to the South Pole in 1912.

For a decade as sculptor to the City of Swansea, Mr Chatfield carved more than 100 plaques, keystones and carving, most directly onto the buildings from scaffolding, in the Maritime Quarter docklands development.

His other notable work includes lifesize statues of the Virgin Mary for St Mary’s Church, Monmouth, and Tintern Abbey. His 30ft high Cornish granite Merchant Navy Monument was unveiled in Swansea in 2005. He has carved a lifesize statue of Britannia on top of the Naval Temple at Kymon, above Monmouth, and the Lord Nelson portrait carved in Spanish marble on his flagship HMS Victory, which is preserved at Portsmouth.

Mr Chatfield is now working on a lifesize statue of the Virgin Mary holding a model of the sailing ship Maria Asumpta, carved from a block of Catalan stone from a quarry near Barcelona. It is to go in the church of Santa Maria in the Spanish port of Badalona, where the sailing ship was built and launched in 1858, named after the Virgin Mary who appeared in a vision to a 14-year-old girl at Lourdes in France that year.