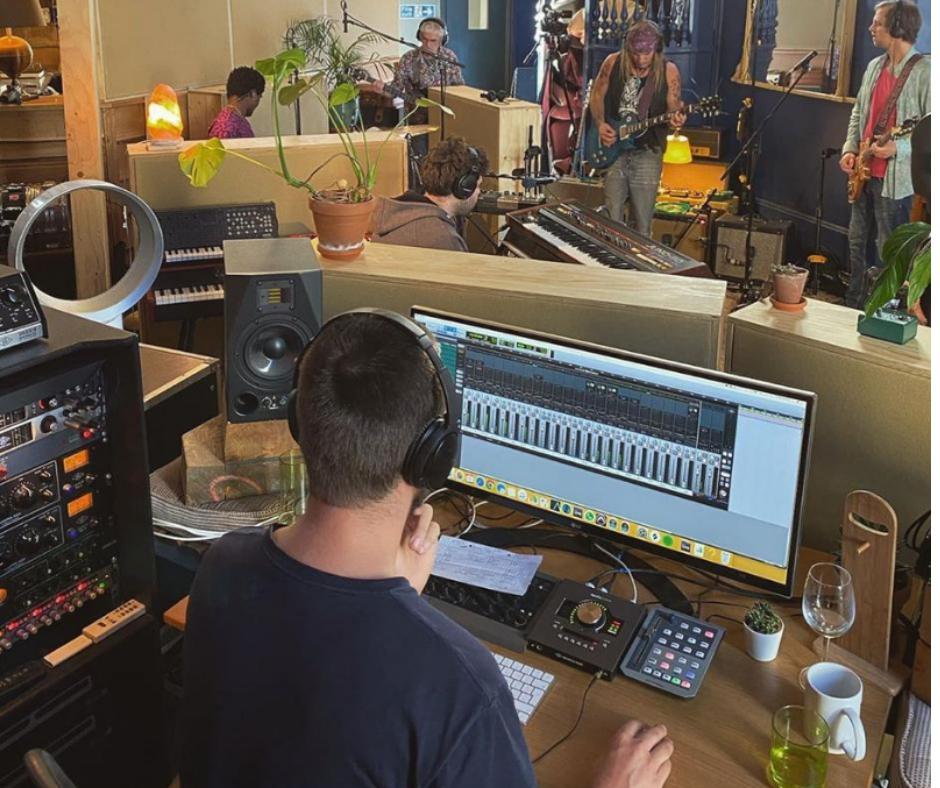 Thanks to Government fund

A Devon music venue in a former hotel ballroom has been turned into a social-distanced recording studio because of coronavirus.

The Barrel House Ballroom has been awarded £5,500 from the Government’s Emergency Grassroot Music Venues Fund to help it survive the industry shutdown, one of 135 across the country to receive a rescue grant.

The venue in High Street, Totnes, was taken over by Sarah and Richard Kidd in 2013, and they set up a brewery and bar to support it.

Sarah, who had been involved in training in the film industry, and her musician husband, created the Totnes Brewing Company which produces craft beers on the ground floor.

Income from the bar helps to fund the 150-capacity historic hall upstairs in what was a Georgian hotel.

The venue was operating successfully with an audience for a wide range of music styles and bands until it was hit by the sudden shutdown in March.

During the closure, the owners were contacted by local sound engineers who found themselves out of work due to the pandemic.

The engineers turned the ballroom into a recording studio, with separate booths to ensure social-distancing.

The Sorting Room Studio has been used successfully by a number of artists and bands.

They have also been working with a local youth music programme called Jamming Station.

But the Barrel House Ballroom is not suitable for social-distancing measures due its size and layout, so is not expected to reopen as a live venue until around April next year.

The grant will now cover the rental of the ballroom until November allowing the studio to carry on.

Sarah said if they were unable to keep up with the rent, it was likely the venue would be lost permanently.

She said: “This grant will buy us some time to look at a long-term plan for the venue while we are unable to host live performances.”

Asked about when the ballroom might reopen for live music, Sarah said: “I am thinking that is going to be after April, as I think we will probably have a vaccine by then, and we will have got out of the winter cold and flu season. Basically we can’t open until there is no more social distancing in place.”

The Totnes Brewing Company bar has reopened, but capacity has been reduced because of coronavirus and it has not been able to host music events which had proved popular.

The Government says the £3.36million Emergency Grassroot Music Venues Fund is being shared among 135 venues across England who applied for support to survive the imminent risk of collapse caused by the coronavirus pandemic.

Culture Secretary Oliver Dowden said: “At this difficult time we are here for culture, so I am delighted that The Barrel House Ballroom is being helped with government grants as part of our £1.57 billion cultural recovery fund.

“This funding award reflects its importance to its community, the musicians it supports, and to the UK’s ongoing success in making the music the world wants to listen to.”

The other venue in Devon receiving support from the scheme delivered by the Arts Council is the Hutong Cafe in Plymouth, which was awarded £9,000.