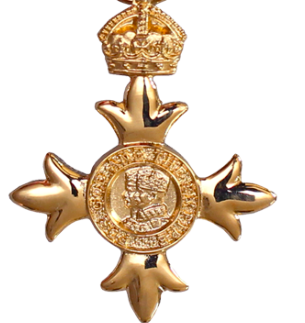 Three months after the list is normally announced  - in order to allow time to consider people who have played a role in the covid-19 crisis - Her Majesty the Queen has honoured people across the UK, including a number of people in Devon.

Sacha Pemberthy, from Exmouth, who is also known as Sacha Romanovitch, has received an OBE for services to business. She's chief executive of Fair4All Finance, which helped poorer people get affordable financial products and services. Though the pandemic she's worked on a covid-19 resilience fund, securing more than £3 million from dormant bank accounts so that 23 responsible lenders can distribute it. Previously she's been the boss of national accountancy firm Grant Thornton, where she promoted social mobility to recruit more people from diverse backgrounds.

Leahman Pratt, the Christian chaplain at Exeter Prison, now has an MBE for his work in the prison and probation service as well as work during the pandemic. Mr Pratt, who is black and 69-years-old is at increased risk from coronavirus, but despite that, he's increased his work hours to fill in for depleted staff. Born in Jamaica but now living in Exeter, Mr Pratt is from the Windrush Generation and suffered a volatile start in life. Now he's an inspirational speaker and a dedicated professional, well after many people have retired.

Clare Thomas from Brixham is honoured for services to residential social care for veterans. Mrs Thomas, who is 54, is home managed at Ilford Park Polish Home, which is said to be Winston Churchill's legacy to support Polish servicepeople who fought under allied command in the Second World War. It's the home for 90 residents, most over the age of 80, many with dementia. Mrs Thomas recognised the issues with covid-19 at an early stage and prepared the home for the tough year ahead. She's the recipient of an MBE.

Peta Husywayte, a 29 year-old teacher from Newton Abbot has the British Empire Medal (BEM) for services to young people during covid-19.    Miss Hsyywayte coordinated The Greater Horseshoe School’s provision for vulnerable children and families and acted as an advocate for them during the pandemic. She's been selfless, calm, positive, caring and professional throughout the crisis, acting as a role model for colleagues and a positive ambassador for young people during challenging times.

Kate Tantam, 39, from Plymouth is specialist senior sister in intensive care at University Hospitals Plymouth NHS Trust. She now has a British Empire Medal for services to Improving patient experience during covid-19. In March, she was at the forefront of creating extra intensive care capacity in the space of just a week, working tirelessly with multiple teams to prepare, train, simulate, procure, support, manage and care.

Hazel Bound, 74, from Exeter, has a BEM for her voluntary service to walking in South West England. She's a volunteer with the Long Distance Walking Association in Devon and Cornwall. The region is regarded as amongst the LDWA’s most successful; to a large extent due to her organisational skills and her ability to manage large numbers of volunteers. She has often worked for 20 to 24 hour shifts for checkpoints at 100-mile events, even manning checkpoints operating through the night. She assisted those who have been suffering from nausea and cleaned up after those who succumbed.

Stanley Hacking, 85, a former Radio Exe Pride of Devon award winner, now has a British Empire Medal to go on his mantlepiece too. Saxophonist Mr Hacking was conductor and founder member of the Stan Hacking Concert Band for more than 35 years since leaving the Royal Marines. The Stan Hacking Concert Band consists of around 60 members whose age range is from very young to the more senior members. His passion for playing, teaching and passing on his vast musical knowledge has been his life since retiring from the Royal Marines, spending hours encouraging and exciting both young and mature players throughout.

Julian Tagg, Exeter City Football Club's president, has been honoured for his voluntary work with the club's charity, the City Community Trust. He has a BEM. He said: ‘This is a tremendous honour and I am sincerely grateful. But this is so much more than about the work I have done for the charity. It is an award for every person who works so hard in that organisation to support our community. From the work we do with people with disabilities, supporting people in Exeter to become healthier, to our latest outreach work connecting people who are isolated or lonely. Every person in the charity is dedicated to improving people’s lives.

This list may not be exhaustive, but does include all Devon residents in the list provided to Radio Exe by the Cabinet Office.