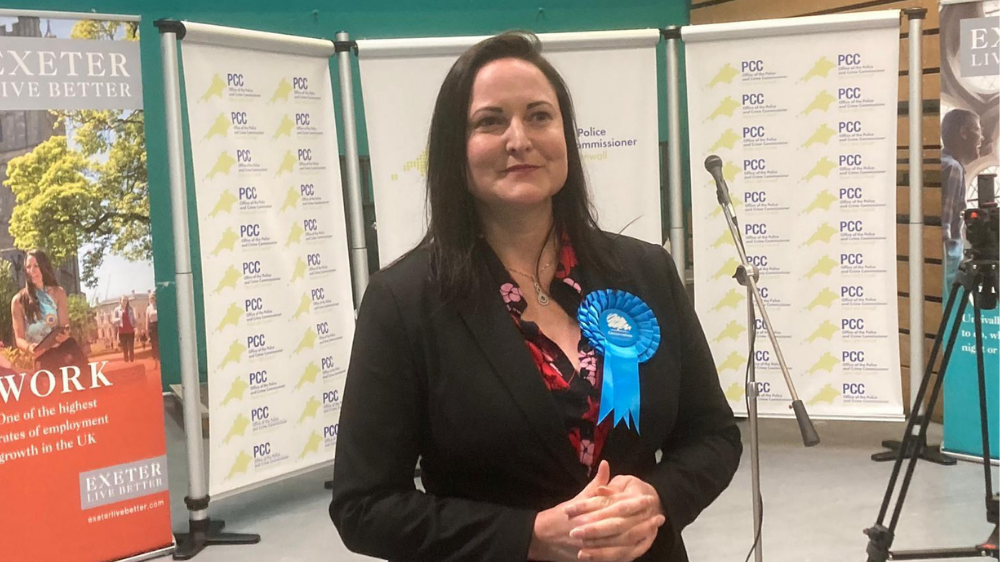 Alison Hernandez, Police and Crime Commissioner for Devon, Cornwall and the Isle's of Scilly

Another three years for Alison Hernandez

Alison Hernandez is back as Police and Crime Commissioner for Devon, Cornwall and the Isles of Scilly for the next three years. The normal five-year term has been reduced because of the election's delay from last year and legal changes.

Despite a lengthy count caused by her not passing the 50 per cent needed to go through in the first round of voting - she fell tantalisingly short at 49.97 per cent - she eventually ended with an increased majority on her 2016 win.

After the second preference votes were considered of people who voted Lib Dem and Green - and who didn't go through to the second round - Ms Hernandez increased her majority to 65.2 per cent, up from 51.1 per cent in 2016.

In her victory speech, she set out her stall for Devon and Cornwall to become the safest place and to get police officers back on the streets.

Numbers were cut by the Conservative-led government during the years of austerity from 2010.

Following her election, which was confirmed at Exeter's Riverside Leisure Centre following more than 11 hours of counting, she said: “I am elated to get the opportunity for three more years. We have become the second-lowest crime area since I came into office and we want to get to number one, so I want to work with the communities to get there. We want to be so intolerant and create an environment so hostile to crime we stay at number one as well.

“We have to get the officers on the street. We have 317 of the 498 recruited and we want to get them out on the street and on foot patrol and the community needs to see that visibility and that investment on the streets where they live.

She added: “The biggest thing is about reopening front desks and police stations. We already reopened Newquay last year, Tiverton is next in Devon, but I think a few stations in Cornwall are keen to see reopen again, with Penzance particularly and a few others waiting to see if there is support for them.

“Tiverton has a lot of community support and will reopen this year by the autumn and the next thing is to get those police on the street. Rural communities expect those police back on the streets and it will be the chief constable’s number one objective.”

She didn't point out that police station closures were done under her watch and regularly came up as being a concern for residents.

The vote share for the Conservatives and the Liberal Democrats was up in 2016, with Labour slipping, while the Greens didn’t stand last time.

Turnout was up in 2016 – 36.7 per cent compared to 22.1 per cent – although slightly impacted by the fact there were only elections in Exeter and Plymouth taking place at the same time five years ago.

The elections were due to take place in May 2020 but were postponed for a year as a result of the coronavirus pandemic, meaning that Ms Hernandez will only serve a three-year term to return to the usual electoral cycle.