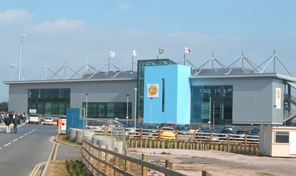 Having lost their opening game of the Under 20s Six Nations to Ireland last week, the young England team faced a high-flying France U20s team at Sandy Park, who were still buoyant after their victory over England in last summer’s U20s World Championship final in Béziers.

After early pressure inside the French 22, the England pack led by the imposing Exeter Chiefs tight head prop Marcus Street, pushed the French off their ball in the 1st scrum of the match and quick hands put winger Ollie Sleightholme in at the corner in the just the 3rd minute. With the conversion unsuccessful, England led 5-0.

The England scrum was becoming completely dominant, with France conceding 6 penalties in a row on their own goal line which eventually resulted in a yellow card for The French prop Gros and a penalty try, giving England a 12-0 lead in the 23rd minute.

Despite being down to 14 men the world champions hit back straight away, when the impressive French number 8 Joseph powered his way over from close range. However, with England’s scrum now pulverising their French counterparts, it didn’t take long for England to be awarded yet another push over try, this time number 8 Tom Willis dotting down.

The French to their credit were taking advantage of their limited possession, which resulted in centre Julien Delbouis crashing his way over in the 36th minute. With the conversion successful, the French were somehow within 5 points of England.

England struck again just before half time though, with Gloucester prop Olly Adkins forcing his way over from 2 meters out to give England the bonus point try. With Marcus Smith’s conversion successful, England U20s went into the break with a much deserved 24-12 lead.

It didn’t take the England’s forwards long to transfer their forward dominance from the 1st half into the 2nd, with England in the 54th minute gaining their 2nd penalty of the game, this time from a driving line out from 5 meters out, leaving England with an insurmountable lead of 31 points to 12.

Despite England’s dominance in the scrum, which unbelievably resulted in all but one of their scrums earning penalties, the French refused to give in and after exerted pressure inside England’s 22, the French managed to gain a penalty try of their own, when England collapsed a well-set maul just one meter out in the 74th minute. With France having a try disallowed in the final play of the game, England held on for a much needed 31-19 bonus point win.

England will next travel to face Wales in just a couple of weeks’ time for round 3 of the Championship, hoping that today’s confidence boosting victory will be the catalyst for going onto claim the title.