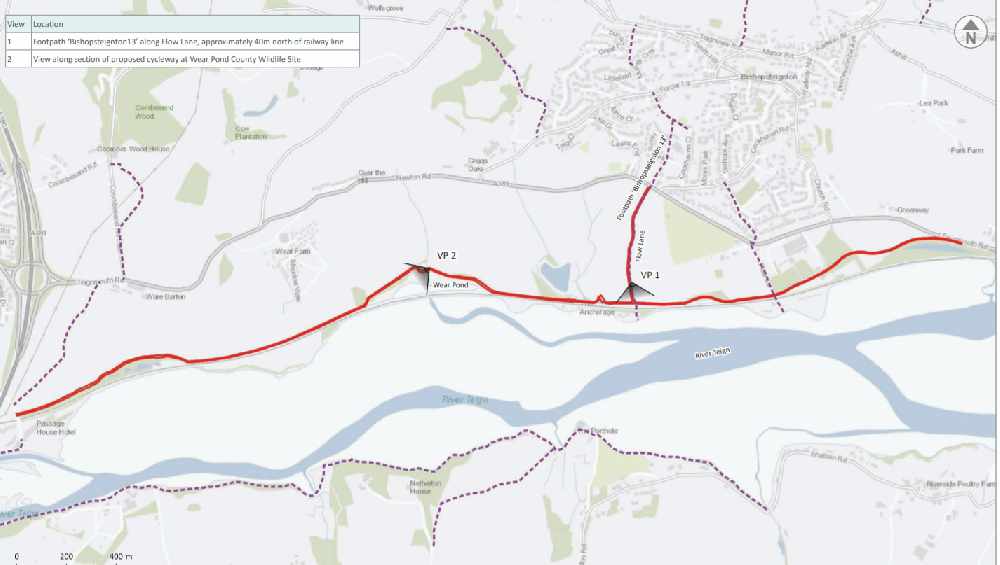 It's the 'missing link' of national cycle route

Plans for the next section of the Teign Estuary Trail between Newton Abbot and Teignmouth that will provide a safe cycling and walking route between the two towns have been unveiled.

The 5 km stretch between Passage House in Newton Abbot and the A381 at La Roche Maurice Walk, east of Bishopsteignton will also include a shared-use path connecting from the A381 to the junction near Morrisons supermarket, at the western edge of Teignmouth.

The proposed path broadly follows the alignment of the Plymouth to Exeter railway line and has been designed to improve connectivity for walkers and cyclists.

A consultation at the end of last year attracted more than 3,000 responses, with 92 per cent of respondents supporting the proposed route.

Cllr Stuart Hughes, Devon County Council cabinet member with responsibility for cycling, said: “This is another important step in the development of the Teign Estuary Trail, which will have a positive impact on the economy and environment of the local area as well as benefiting local people’s health and wellbeing. We’ve seen that the majority of the public who responded to last year’s consultation supported the route and we’re keen to progress this next 5km of the route.”

Cllr Ron Peart, Devon County Councillor for Kingsteignton and Teign Estuary, said: “This is great news that this project is moving forward. I have many residents who contact me in support of the Teign Estuary Trail and the many benefits this will bring to the health of residents, the environment and the local economy. The next step is to gain planning permission; this will help in obtaining funding for this much-needed project.”

Teignbridge’s executive member for planning, Cllr Gary Taylor, added: “The consultation showed there was virtually universal support for extending the Teign Estuary Trail and I am delighted that progress is being made with the submission of this planning application.

“The trail is an important development for safer cycling travel as well as for leisure pursuits and I hope that the planning process is completed swiftly so work can get underway once funding is secured. Teignbridge District Council, in collaboration with Devon County Council, will now be preparing an Outline Business Case for the Trail to support any future funding application.”

The western extent of the path would run from the Passage House Inn and the path joins Hackney Lane just north of the Hackney Lane railway bridge. The new shared-use path is proposed to run parallel to the north of the existing railway line but will skirt the northern/eastern section of the lagoon near the western end of the scheme at Ware Barton Farm.

Heading further east, a new subway is proposed under an existing farm track that leads to the bridge over the railway at the bottom end of Wear Farm, before the path extends as far as Luxton’s steps and at this point the path meets the existing Bishopsteignton public footpath.

On the eastern section, the path will continue eastwards from Luxton’s steps until it joins the A381 Newton Road. A new bridge for the shared-use path is proposed just north of and parallel to the existing railway bridge over Flow Lane and the existing Bishopsteignton footpath, while a new Toucan crossing is proposed across the A381 to the east of Shute Fruit to improve connectivity for walkers and cyclists.

In a planning statement submitted with the application, Devon County Council add that the Teign Estuary Trail seeks to complete one of two ‘missing links’ of Sustrans National Cycle Network Route 2, a long-distance cycle route that will link Dover in Kent with St Austell in Cornwall, when complete, with the other missing link is between Plymouth and St Austell.

It adds: “It is proposed that the multi-use trail is used to provide a recreational facility for local residents, day visitors, staying visitors, commuters and educational groups. These groups can be further split into, for example, casual or recreational cyclists, cycle commuters/enthusiasts, bird watchers, anglers, recreational walkers or dog walkers, wheelchair and mobility scooter users.

The Teign Estuary Trail is being developed in sections as funding opportunities become available, with the initial section between Kingsteignton and Town Quay, in Newton Abbot, opening in 2023. Devon County Council planners will decide on the application at a later date.