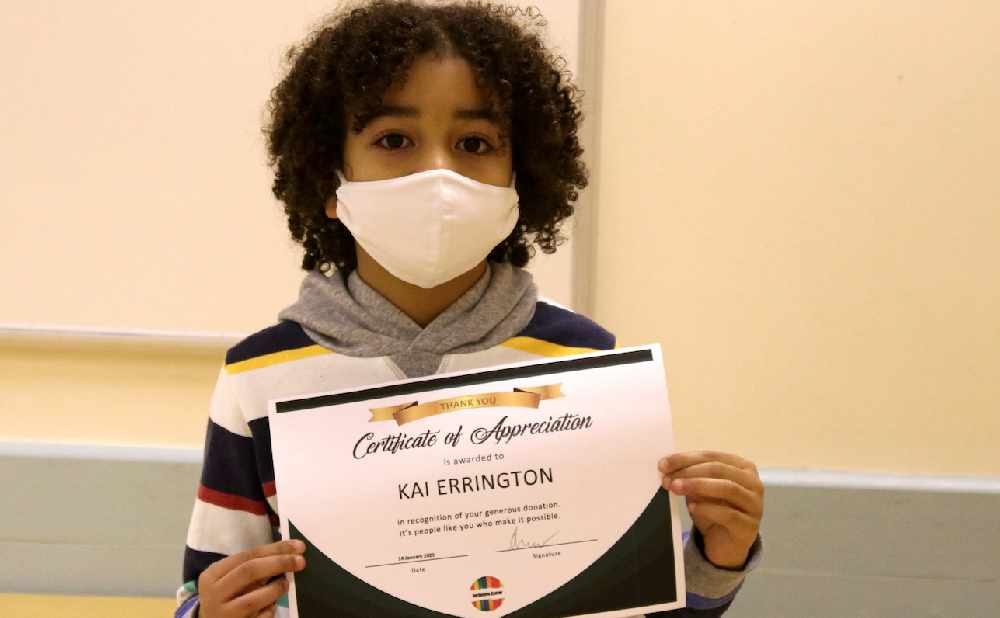 Kai, eight, has 'zoom dance' instead of gifts

A pupil at an Exeter Primary School who opted to donate presents to children less fortunate, on his birthday, rather than receiving them himself has been presented with a certificate of thanks.

Kai Errington, eight, who attends Westclyst Community Primary School, not only gave all his presents away, but some of his school friends also supported him and donated presents as well.

The gifts were delivered to children in Exeter by volunteers from Inclusive Exeter (IE), which, for some months, has been operating a food project delivering food parcels to those in need across the city.

Kai's mum Candace explained: "Kai was quite anxious for his eighth birthday and he was counting down the days and looking forward to it. He said in a conversation that he didn't want any presents for his birthday or Christmas.

"I was quite surprised by that remark and I asked ‘Are you sure?’ and he said ‘Yes I am sure, I have everything that I need.' I thought about it and said it would be nice if you receive presents to give them as Christmas presents to those less privileged and he liked the idea and so we approached Inclusive Exeter. Some of his class donated presents as well."

Candace added: "Kai was definitely more excited about his Zoom party rather than having presents. He had a fun Zoom dance party with his family and school friends and that was the highlight of his birthday."

Shahar Lashkor, IE coronavirus hardship relief project coordinator, presented Kai with a certificate of thanks on behalf of Inclusive Exeter. He told Kai: "The children who received them were blown away by your gifts. Everybody I have told has been astonished you gave your presents to other children and all our directors would like to say a very big thank you from Inclusive Exeter."

Inclusive Exeter is a partnership of grassroots community organisations established to give Black, Asian and minority ethnic (BAME) people in Exeter a great voice. Last year IE operated an emergency food project for several months to support people from the BAME and wider community across Exeter. More than 1,000 people were assisted at that time.

In recent months the food project was re-started to meet an increasing demand. Hundreds of people have been assisted since it was restarted. IE’s food project operates thanks to many volunteers, government funding and food from FareShare, Exeter Sidwell Street Tesco, Crediton Morrisons, Exeter Food Action and Crediton Dairy.

During the Christmas period 120 families with children received bumper family packs of food and gifts for children from Inclusive Exeter through the Marcus Rashford Kids @ Christmas campaign. Kai's gifts were donated to some of these children.

Alan Quick, IE director, said: "It really was heartwarming that Kai thought of others before himself. What a fantastic thing for someone so young to do. Kai told me that he wants to carry on doing this charitable work, asking school friends and family members to donate a present on their birthday each year, which he can then give as Christmas presents to those children less fortunate next Christmas.

"It is heartwarming that Kai is so thoughtful of others and understands the act of giving."