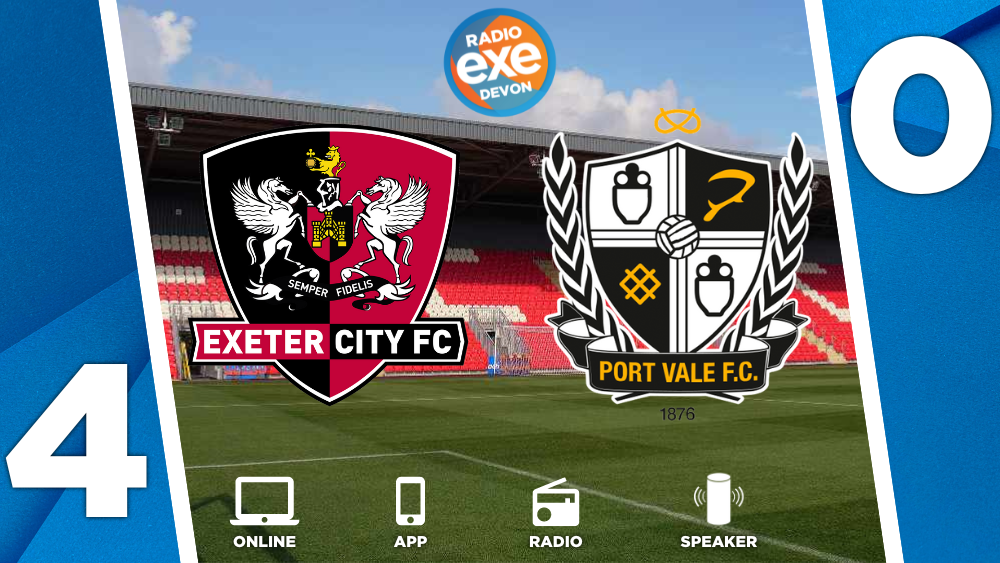 You've got to have hope

A sensational strike from Harry Kite, and a Jevani Brown brace helped Exeter City to their first win of the season over Port Vale at St James’ Park on Saturday.

Exeter and Port Vale were both promoted to League One last season, City making the automatics by finishing second to Forest Green, while the visitors beat Mansfield 3-0 in the play-off final at Wembley.

Incidentally, Port Vale denied the Grecians the win in the fourth tier by winning at St James’ Park at the end of last season – one of 11 victories they took on the road last campaign.

The defeat at home on the final day constituted one of just three occasions on which Exeter had tasted defeat in front of their home crowd in 21-22.

Both sides put points on the board in the opening game of the season. Sam Nombe’s early goal earned City a point on the road at Lincoln, while Vale got off to a winning start at home with a 2-1 win over Fleetwood.

Vale made a strong start at St James’, winning an early an early corner after Funse Ojo’s throw was headed behind by Cheick Diabate, before Ben Garrity’s shot was eventually held by Jamal Blackman after a game of pinball in the box.

City tried to make their way down the other end as Jack Sparkes found some space on the left, but his cross sailed behind.

A few minutes later, the home side were on the ascendency again, a Josh Key effort flying over the away stand as Exeter tried to cause Adam Stone some problems.

Exeter had the better of the possession over the first 20 minutes, but struggled to create of anything, and they were almost punished.

Mal Benning walked onto a lovely layoff by Jamie Proctor, but he mis-hit his effort as he dragged the first-time strike wide.

The home surge continued though; a long throw from Alex Hartridge was initially cleared, before a blocked shot by Harry Kite found Jevani Brown on the volley, but his strike was well dealt with by Stone.

Moments later, Hartridge was lucky to escape unpunished as he held onto possession in a dangerous area, and was pickpocketed by the hungry Sammy Robinson. Diabate, however, was on hand to cover and clean up after his central defensive partner.

At the other end, City were nearly in again; Pierce Sweeney played a dangerous ball into the near post, but the angle was too tight for Sam Nombe, whose stretching effort went behind.

The hosts won a corner when Ben Garrity clocked a ball in by Josh Key, but Diabate’s subsequent header went over.

Kite opened the scoring midway through the first half with a phenomenal strike; a ball into the box was well headed out, but it fell nicely for the midfielder, whose cracking volley flew into the bottom corner – the perfect way to open the account at St James’ Park for the season.

There was a threat of a second when Jack Sparkes’ ball in from a free kick found Tim Dieng at the back stick, but the Frenchman was faced with an acute angle, and Stone collected his attempted pull-back.

Diabate was booked for kicking the ball away after the visitors were awarded a free kick, and the first card of the afternoon was soon followed by the second – Sweeney going through Benning to collect a yellow of his own.

A penalty was awarded to the home side with just under 40 minutes played when Robinson, who had been having a good game, brought down Jack Sparkes in the box, Jevani Brown stepping up to coolly dispatch it into the bottom corner.

City pushed for a third towards the end of the half as a ball in from Archie Collins led to handball appeals in the box, but there was nothing doing this time.

Harry Charsley managed to get in behind Sparkes in a rare Vale move forward, but he was caught in two minds as he tried to decide whether to cross or shoot, and in the end it was a bit of both as the ball rolled harmlessly out for a goal kick.

Robinson was then put in on goal, looking to make amends for the concession of the penalty, but Blackman made himself big, putting his frame in the way as he held on nicely.

Brown had an early half chance straight away in the second 45, but he misjudged his volley as City made a strong start to their attack of the Big Bank.

The forward caused problems for Stone with a ball in from a corner, as the keeper misjudged the flight, with Jamie Proctor heading clear at the far post, saving his keeper’s blushes.

Moments later, it was Sparkes’ turn to test the defence with a ball in that found Key at the back post, and the wing-back’s header across was cleared, before a Kite effort this time found its way into the crowd behind the goal.

Nombe was brilliantly played in by Brown, and he held off the challenge Conor Hall as he sprint through, but his effort, one-on-one with Stone, trickled wide of the mark.

Blackman later played with fire as Robinson got in the way of his clearance, but the keeper recovered to collect in his box as City survived the scare.

The Grecians began to gain more control of the game from there, and started to drain Port Vale spirits as they wound the clock down with some excellent game management.

However, they sprung back into life on 70 minutes when Sparkes played Nombe into the box down the left, and the striker played it across for Brown, who scored his second and City’s third of the afternoon.

This was swiftly followed by a fourth when Nombe expertly brought the ball down his chest, turned in the box and slotted past stone and into the net – City were rolling.
The win takes Exeter up to second in League One, two points behind Peterborough, who took a 3-0 win over Morecambe.

After the game, City manager Matt Taylor emphasised the importance of ensuring good home form in what will be a demanding League One season.

“Great win,” he said after the game.

“We have to make the most of it, I don’t know how many League One wins we’ll get this season, especially at home.

“I said before the game it wasn’t a revenge mission in any way, it was a statement that our home form needs to be strong again this season in the League one campaign.

“I thought we started the game relatively well, in terms of just being competitive, and then as always against a matchup team and a front-foot team like Port Vale are, it’s going to be one mistake or one moment of quality.

“And that was an outstanding moment of quality from Harry Kite, something he’s probably not renowned for, no disrespect to him.

“He hit that ball so, so cleanly and that was an example of my message at half time that just committed to that moment.

“And we needed to commit to more moments in that first half and we improved our second half display.”

The 40-year-old was impressed with the solid game management in the second half.

“The message at half-time [was] that we had to manage the game better,” he explained.

“Pierce and Cheick [were] booked needlessly, and [we need] just a little bit of understanding… don’t give them an easy ride through the middle of the pitch and into our box.

“And when they did go into our box in the second half… I don’t want to say it was predictable but it was crosses and throws and entries from deep areas as opposed to any space.

“We felt we could nullify that with three big centre-halves that were winning first contacts and the goalkeeper who dominated the box.

“Port Vale are a good team, I watched the video of them beat Fleetwood last week so they’re up and running.”