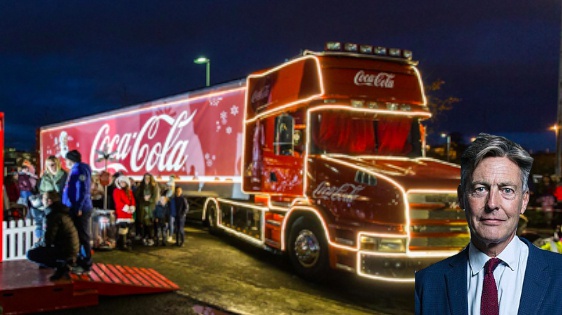 Listen: Ben Bradshaw is criticising Coca Cola for bringing their truck to the city on Remembrance Sunday

Exeter MP Ben Bradshaw is criticising Coke Cola for bringing their truck into the city on centre on Remembrance Sunday. The truck is on it's Christmas tour and will be in Princesshay tomorrow and Sunday.

Mr Bradshaw doesn't think it strikes the right tone as the city will fall silent at 11am on November 11th.

"I don't want to sound like a scrooge," says Mr Bradshaw, "But you would have thought that Cola Cola could have given this rampant commercialism a rest on Remembrance Sunday."

🗣️ LISTEN: Exeter MP @BenPBradshaw is criticising Coca Cola for bringing their Christmas truck into the city on Remembrance Sunday. Mr Bradshaw doesn't think it strikes the right tone as the city will fall silent at 11am on November 11th.

In response to Mr Bradshaw's, a spokesman from Coca Cola says: “We are looking forward to visiting Exeter this weekend as part of our annual Christmas Truck Tour."

"We know Remembrance Sunday is an important and significant day for people both here and elsewhere. That’s why the event will not begin until 12pm.  As we have done in previous years, we will be encouraging all of our crew on the truck tour to wear a poppy if they wish to and we will ensure the two minute since at 11am is properly observed by our team when they are setting up.”