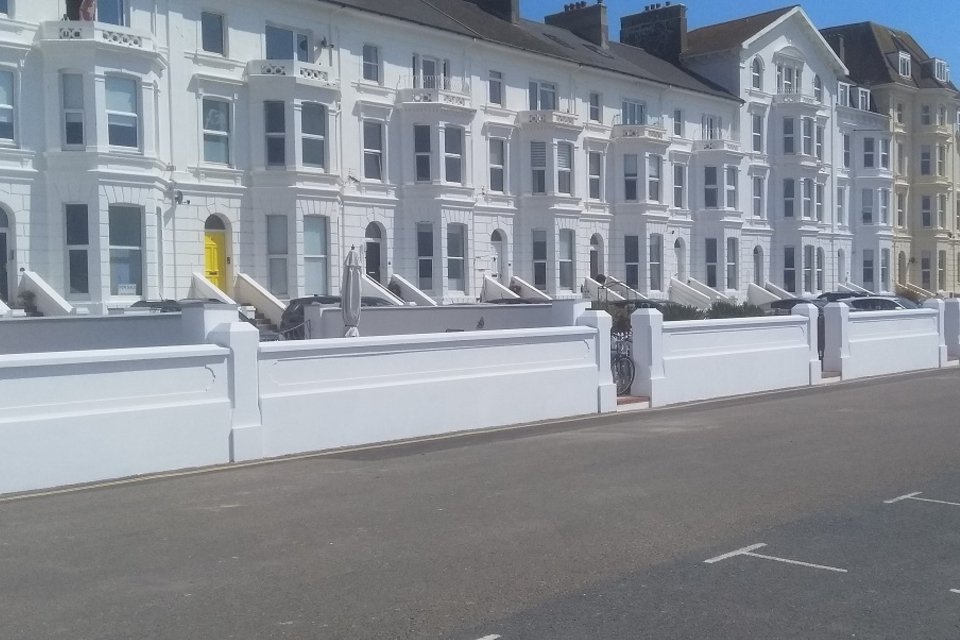 A bit of spit and polish too at Alexandra Terrace, Exmouth

Work on the new £12m Exmouth tidal defence scheme to protect part of the town from flooding has paused for a summer break.

The Environment Agency has removed most of the construction areas and reopened the Esplanade. More than two thirds of the scheme has been completed with floodgate installation, landscaping and planting to be finished later this year.

Once complete next year, the scheme will reduce the risk of tidal flooding to more than 1,400 residential and 400 commercial properties. Construction work started in June 2019. Exmouth will then have much better protection ahead of any winter storms. Flood risk will be cut from a 1-in-25-year chance to 1-in-200-year possibility.

So far, on the estuary side a wall approximately 660m long has been built from a boatyard to the Imperial Recreation Ground. Contractors worked during low tides to repair the retaining wall from the nature reserve to the Estuary View car park. A large area of the nature reserve was cleared of vegetation to create a continuous flood defence embankment which will be seeded this autumn.

At Camperdown Creek new gabions, large metal baskets filled with stone, have been replaced with new sheet piled defences clad with recycled hardwood timber were installed by the Sea Cadets and the foundations have been built for the three flood gates.

The Esplanade area from The Grove Pub, including Morton Crescent and the former Imperial Hotel has had new defences built, with the work including a combination of flood walls, new drainage, wall strengthening, rock armour installation and landscaping.

Environment Agency flood manager Ben Johnstone said: “We are now one step closer to a finished tidal defence scheme for the people of Exmouth. I am extremely proud of the team who have worked so hard to keep this vital work on track whilst adhering to government guidance on coronavirus. I would also like to thank residents for their understanding and co-operation which has helped us get to this point. A lot has been achieved this year and I look forward to the next phase.”

East Devon District Council is also contributing to the project, and will maintain the defences built on council-owned land in the future.