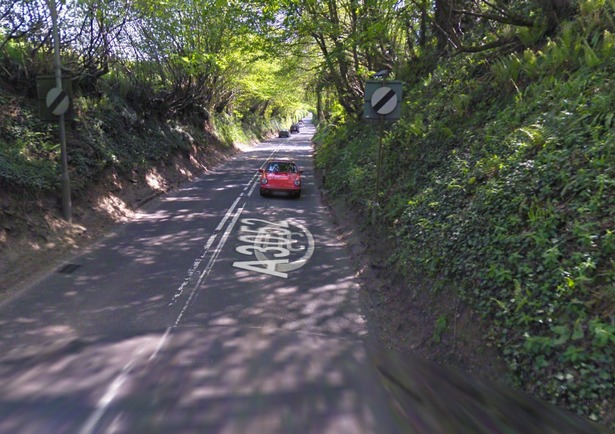 Repainted - but not well

A number of councillors in East Devon have asked the committee responsible for roads to take urgent action in order to improve safety at an accident black spot near Newton Poppleford.

Members of East Devon Highways and Traffic Orders Committee (HATOC) were discussing Four Elms Hill, the A3052 Exeter to Sidmouth road, after it was suggested that the county council had failed to act on a decision made in July 2019 to paint double white lines along the Four Elms stretch.

The move would have prevented vehicles from overtaking.

Earlier this month lines were repainted, but the lining included stretches of broken white lines instead, indicating overtaking with caution is allowed.

“The road was duly closed for four nights and the public were told it was going to be repainted with double white lines.

“The expectation was double white lines and what do we get? We actually get a scheme that doesn’t – believe it or not – even reflect this because they’ve made short dashed lines with overtaking advisable instead of the long dashed lines that were there previously.

“So they’ve actually made the situation worse not better. And the people of Newton Poppleford are, at best, confused and at worst furious.”

An accident occurred on the stretch of road on 21 July but exact details are not available and it is unclear whether it was caused by the concerns outlined by the councillors.

She said: “So there’s great frustration on the part of residents, parish councillors, district councillors, Devon county councillors and me about the poor job done on Four Elms Hill.

“There are accidents along the entire length of the hill not just certain hotspots.”

Cllr Ranger suggested that Devon County Council may not know the extent of the dangers because only serious injuries or ‘at fault’ incidents are recorded.  However, she said local police were more likely to understand the true number of accidents.

“Whatever happened to doing what matters? Why would you shut a major road and only do a half-baked job?” Cllr Ranger added.

“What is required is a proper survey of all road markings from the base of the hill including the red warning lines and the slow signs which are in dire need of refreshing.

“It needs double white lines up the entire hill because all drivers understand what they mean.”

During the 25-minute discussion, officers suggested a further report would be needed to consider the issues involved.

Cllr Christine Channon (Conservative, Exmouth & Budleigh Salterton Coastal Division) suggested more urgent action was required. “We can’t wait for any reports of this, that and the other. This was wrong,” she said. “They’ve not followed up what we recommended. And so consequently somebody needs to get down and sort it out PDQ.”

Other councillors reminded the committee of the meeting in July 2019 in which, they said, specific demands were made.

Cllr Phillip Twiss (Conservative, Feniton & Honiton Division) said:  “I am under no confusion whatsoever that I voted to support a 40 mph speed limit on that stretch of hill.

“I don’t have any illusion whatsoever about what I voted for and what that meeting was voting for – as far as I recall unanimously – which was 40 mph speed limit and double white lines.

“To my mind – put simply – this is a cock up it’s a mistake and it needs to be rectified now.”

Councillor Stuart Hughes, Devon County Council cabinet member for highway management and chair of East Devon HATOC, said: “The 40 mph speed limit was implemented as agreed by the HATOC committee in 2019/20, and although the new lining has been installed in accordance with the minutes of the July 2019 HATOC, unfortunately it doesn’t reflect the committee’s understanding of what had been agreed.

“The committee would prefer double white lines where both lines are solid, to remove overtaking manoeuvres from this section of road. A safety audit still has to be carried out on the new lining scheme and we will have to consult again with police before a ‘double solid’ white line system can be introduced.”