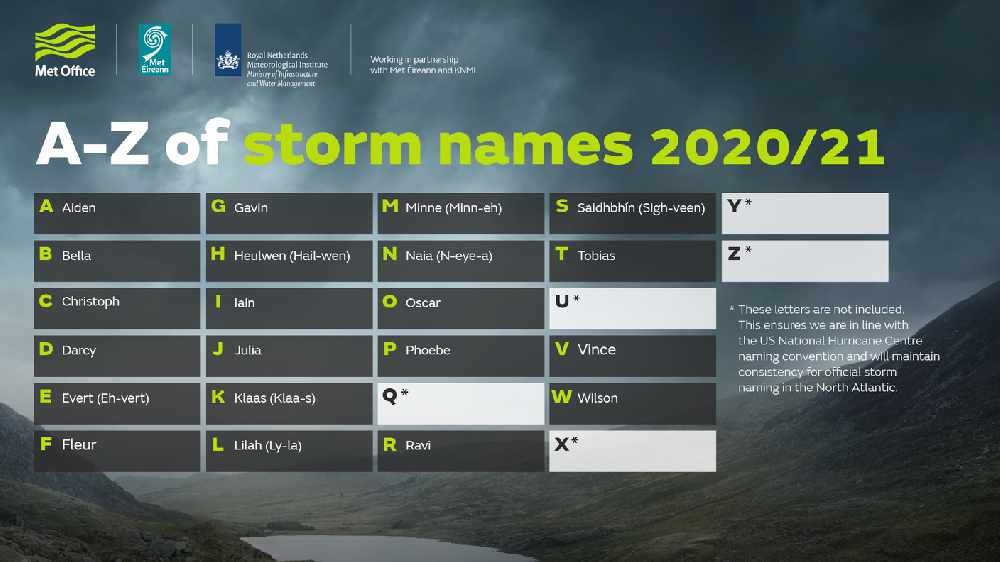 Who's going to hit us this year?

We could have the Oscar of storms. Fleur could push East. Will we miss da Darcy? The Exeter-based Met Office, along with Irish Met Éireann and KNMI in The Netherlands has released the list of storm names for the 2020/1 season. It's the sixth year they've personalised storms in this fashion.

The first storm to hit from 1 September will be ‘Aiden' and if we get through the list we'll be meeting 'Wilson' at some point. As in previous years, Q, U, X, Y and Z will not be used, to comply with the international storm naming conventions.

Will Lang, head of the National Severe Weather Warning Service at the Met Office, said: “The impacts from Storm Ciara and Dennis earlier this year are still fresh in many people's minds and although it’s too early to anticipate what weather this autumn and winter will bring, we are prepared with a new list of names to help raise awareness of severe weather before it hits.”

Evelyn Cusack, head of forecasting at Met Éireann, said: “Met Éireann forecasters look forward to working in close co-operation with our colleagues in the UK and Netherlands by continuing to provide a clear and consistent message to the public, encouraging people to take action to prevent harm to themselves or to their property at times of severe weather.”

Gerard van der Steenhoven, director general at Royal Netherlands Meteorological Institute (KNMI) said: “As storms are not confined to national borders, it makes a lot of sense to give common names to such extreme weather events. As many people often travel between our countries, the use of common names will make it a lot easier for them to appreciate the hazards represented by a large storm system.”