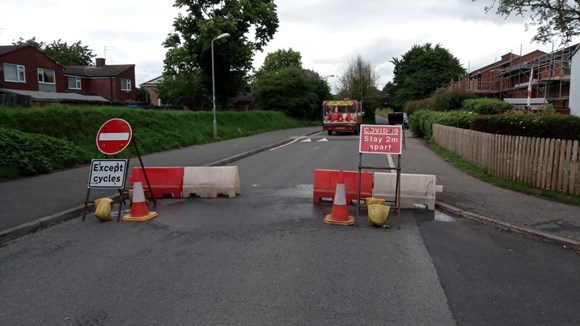 More roads are being closed to vehicles from Monday as Devon County Council takes advantage of the pandemic to encourage 'active travel' - cycling and walking.

The traffic calming measures are said to be temporary - meaning for up to 18 months - and are being put in place to support social distancing. A four-mile route launched earlier in June on the E9 cycle route on Ludwell Lane, Dryden Road and Wonford Road.. The new changes are along the E3 cycle route linking Heavitree and Whipton to the city centre which passes close to four primary schools, a secondary school as well as local parks.

Roads being closed include Vaughan Road, from the junction with Clifford Close to the junction with Bodley Close, and Chard Road between Whipton Lane and Nicholas Road. There is no through traffic allowed in Homefield Road between Bonnington Grove and Bicton Place. And along Park Place cyclists will now be allowed to travel in both directions.

The council claims the new measures will reduce traffic and create a cleaner, safer and quieter environment for cyclists.

Other recent changes include a one-way system with contraflow cycling on Magdalen Road, helping key workers travelling to and from the RD&E Hospital and those working at Pynes Hill and Sowton.

Councillor Stuart Hughes, Devon County council’s Cabinet Member for Highways Management said: “During Lockdown, safer conditions and quieter roads have generated a great interest in cycling among all ages and abilities. With that in mind we have been delivering these additional quieter routes through residential areas which we hope will encourage more Exeter residents to travel in a sustainable, safe and healthy way."

Last week, the county council caved in to local pressure after ditching plans to stop driving driving over Barnstaple's Longbridge - plans they also said were important safety measures in the light of social distancing requirements.