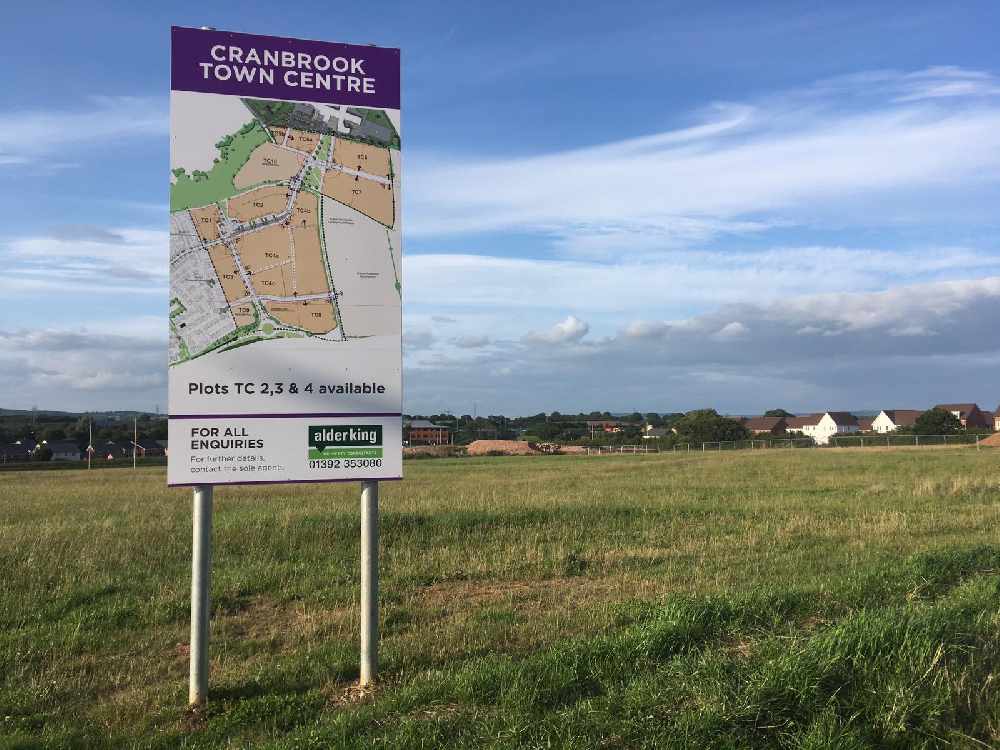 The new town still has very few facilities, despite 2,000 residents.

All were promised to be part of the town centre for Cranbrook, but despite nearly 2,000 homes in the town occupied, none of the promised facilities have yet materialised.

The Cranberry Farm pub, due to be the very centre of the town, still stands alone, surrounded by empty green fields.

Signs advertising the town centre still stand tall, but the land remains unused, exactly as it did 12 months ago.

Cranbrook’s current plan says that a supermarket, other retail shops, service industries and other commercial activities will be provided.

The existing legal agreement says the Cranbrook Consortium is obligated to provide an initial 500m² of retail space at 2,000 occupations, a skatepark at 2,250 occupations, a children’s centre at 2,500, a town council building, a library and a youth centre at 3,450 occupations, and a health and wellbeing hub in the town centre.

That agreement is based on development of the first 3,500 homes – but the town is set to eventually expand to nearly 8,000 homes and with a population of 18,000.

Answering questions from residents recently, Cranbrook town council said the consortium has not been able to agree an acceptable location for the skate park which will not give rise to noise issues for residents.

And they said while there are discussions in progress about how the town centre can best be delivered and utilised, ‘the consortium cannot force businesses to come to Cranbrook’.

So how will businesses ever be convinced to come to Cranbrook? And how will the town eventually develop to consisting of 7,750 homes with a population of around 18,000?

Those are questions that the new Cranbrook Plan, submitted by East Devon District Council to the secretary of state for examination, attempts to answer.

The plan aims to refresh the vision and policy for the town centre to respond to evolving and changing needs and pressures for development. It says that while existing planning permission exists for town centre development at Cranbrook, many of the assumptions are now somewhat dated and increasingly unlikely to be realised in a changing environment for town centres and tough retail conditions.

East Devon District Council believes the plan represents the best way forward for the development of Cranbrook and a spokesman said: “Once adopted, the Cranbrook Plan will provide a clear proposal for the delivery of the new town including key policies to deliver zero carbon development, a thriving town centre, new schools, open spaces, sports pitches and other community facilities.”

So what does the Cranbrook Plan say? And how will it actually deliver the long-awaited town centre?

Cranbrook has already seen rapid development, with around 1,800 new homes built and occupied, together with the completion of two schools for more than 1,400 pupils, a railway station and neighbourhood centre as well as an extensive country park.

Planning permissions and land allocations already provide for the expansion of Cranbrook to around 6,500 homes and the plan allocates land to take development to around 7,750 homes – for 18,000 residents – and will guide the future development of Cranbrook into the 2030’s.

The Cranbrook Plan aims to assist and speed up the delivery of Cranbrook in a planned and commercially viable and profitable manner, while developing a town that is a healthy and attractive place to live and work in.

It stats that through a managed process, the services and facilities required by a new town are to be delivered in tandem with the new homes and the town should attract external businesses that thrive in a vibrant town environment as well as ensuring a creative, confident economic identity developed from within the community.

HOW WILL THE TOWN CENTRE BE DEVELOPED?

The plan says that as a healthy new town, which is self-supporting and capable of meeting most of its own retail, commercial, economic and social needs, it is essential that the area is vibrant and that the town centre must draw people into a place where they can meet, take part in the activities and resources available or simply sit and watch the world go by.

The town centre should be focussed around a market square which is a multi-functional space used for cultural purposes, recreation, and outside/market trading and frontage development which addresses both the square and the roads/access routes leading to it.

Within the town centre, provision shall be made for a Health and Wellbeing hub, a leisure centre, a civic centre (town council offices), a library, a children’s centre, a youth centre and extra care housing.

The establishment of new retail facilities which are outside of the defined town centre and are not proposed in any one of the three neighbourhood centres will not be permitted if they would harm the convenience, vitality or viability of the town centre or lead to a dispersal of activity.

No more than one hot food and takeaway premises for every three other shops will be permitted within the town centre boundary.

BUT WHAT ABOUT THE SHORT TERM?

The plan says that it is recognised that the town centre will take time to develop as a result of the need for critical numbers within its catchment and the commercial realities of delivering a brand new 21st century town centre.

However, the plan says: “While an existing planning permission exists for town centre development at Cranbrook many of the assumptions that informed the permission are now somewhat dated and increasingly unlikely to be realised in a changing environment for town centres and tough retail conditions. It is appropriate, therefore, to refresh the vision and policy for the town centre to respond to evolving and changing needs and pressures for development and to build flexibility into the plan.”

The plan floats one idea – an initiative centred on the use of temporary modular units to provide retail, commercial or community spaces. It says that shipping containers are one option for these units, are cheap to purchase and can be stacked up and if need be, joined together and can also be clad in other materials or painted to create an attractive but flexible space for a range of uses.

It adds: “With minimal services required they can become effective temporary spaces that can house a range of enterprises, especially new start-up businesses who have low covenant strength, the plan says, adding that by using temporary space what it is that the community needs and can sustain can be tested before providing them in more costly and permanent form.”

WHERE WILL THE EXPANSION AND DEVELOPMENT ALSO TAKE PLACE?

Any business or other use that is permitted within these areas must be of an appropriate scale to the mixed use area and mainly serves the needs of the immediate neighbourhood and must not undermine the vitality and viability of the town centre.

40 hectares of land at the Bluehayes Expansion Area is allocated for a mixed use development, which will include:

The Bluehayes expansion area will comprise a mix of housing, community and commercial uses that will provide a key route through the town linking the Cranbrook railway station with the Treasbeare expansion area, Skypark, Exeter Airport and existing development at Broadclyst Station.

62 hectares of land at the Treasbeare Expansion Area is allocated for a mixed use development, which will include:

The Treasbeare expansion area will comprise a mix of housing, education, community, sport, employment and commercial uses (together with safeguarded land for the energy centre) that importantly will provide a key location for activity in the town and act as a hub for education and sporting facilities in this area. The sports hub in Treasbeare will be the main hub in Cranbrook and provide a wider range of facilities than at the Ingrams Sports hub further to the east.

110 hectares of land at the Cobdens Expansion Area is allocated for a mixed use development, which will include:

This Cobdens expansion area will contain around 1,490 new homes and social and community facilities. It will include provision for a neighbourhood centre and associated mixed and meanwhile uses as well as a large area of Suitable Alternative Natural Green Space (SANGS).

30 hectares of land at the Grange Expansion Area is allocated for a mixed use development, which will include:

WHAT ELSE IS IN THE PLAN?

The plan also safeguards land for a second railway station in Cranbrook and says Rail Infrastructure Provision shall be made for an enhanced frequency of rail services at Cranbrook so the town is served by a half hourly rail service in each direction.

Bus infrastructure provision shall be made for bus services to run on the primary routes at Cranbrook and bus stops, capable of displaying real time data shall be provided at regular intervals throughout the town so as to adequately serve residential and commercial and employment areas.

Only 15 per cent of the residential developments within the built-up area boundary of Cranbrook will be affordable houses, compared to the 30 per cent for the first phase of development, in order to make the plan viable to developers.

London Road (B3174) will become a route ‘in’ Cranbrook, rather than a route around or through Cranbrook. Currently the London Road (B3174), formerly the A30, continues to represent a fast and relatively straight route which, with the exception of the roundabouts arising from the development of Cranbrook to date, largely ignores the town. It is not appropriate that when the expansion of the town takes place – particularly where this is south of the London Road, that this road continues to present itself in the same way.

WHAT DO PEOPLE SAY?

Cllr Susie Bond, deputy leader of East Devon District Council and portfolio holder for strategic development, said: “It is great to see the Cranbrook Plan submitted for examination. A huge amount of work has gone into producing the plan, which has been a long time in preparation. We have worked really hard to take on board the views of the community, the developers and other interested parties and reach agreement wherever possible.

“Unfortunately there are still some areas of disagreement but I hope that with the help of the planning inspector through the examination process we can find solutions that will enable the community at Cranbrook to continue to grow and thrive.”

Cllr Ian Thomas, the former leader of the council, but who was the leader when the plan was formulated, added: “Around 4,000 people live in Cranbrook now and the results of the resident surveys indicate that over 90% of people have moved from within Devon – truly a case of providing homes for local people. The results also show that a strong community spirit exists

“Looking to the future, East Devon District Council’s Local Plan anticipates that Cranbrook will grow to a population of around 20,000 people. It will become the second largest town in the district and one of the largest in Devon.

“This Cranbrook Plan guides this future growth, setting out how and where the homes, shops, business and community spaces to serve those people will go. It aims to remove uncertainty and barriers to delivery to enable the continued smooth delivery of the town; ensure that the delivery of community facilities and employment spaces are prioritised alongside the delivery of homes and provide clarity to all about how we will ensure that Cranbrook is a great place for all to live and work.”

The Cranbrook plan, together with its supporting evidence and the public comments received can be found on the East Devon website

A planning inspector, appointed by the secretary of state, will consider the plan in public in the autumn to hear from parties who have made representations.

Following these sessions the inspector will prepare a report which the council hopes to receive early in 2020.