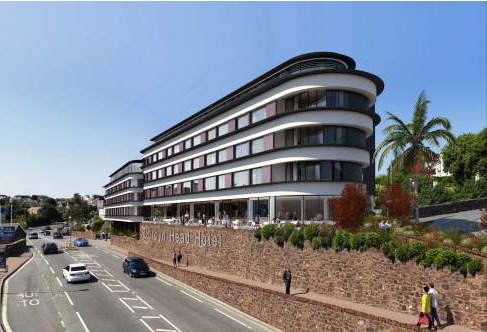 By the size of a newborn baby

A controversial new seafront hotel at Torquay has been reduced in height – by 50 centimetres. That's the length of a newborn baby. About the size of actor Danny Devito's inside leg. It's not much for a multi-storey building, but it makes a nod in the right direction.

Torbay's councillors have approved the change to the design of the building to replace the Corbyn Head Hotel at Torquay.

The highest point on the rooftop bar of the earlier version given permission in last September was 20 metres. That was a metre lower than a scheme rejected by the council's planning committee three months earlier.

Another design was put forward with the height and length slightly reduced and changes to the layout of the car park. That scheme, which added a parking space and an extra guest bedroom, was approved by the planning committee this week.

The revised scheme cut 50cm (1.64ft) from the overall height, reduced the width of the building by about the same amount, added a rendered column to the front near the entrance, and changed the parking layout to improve the flow of pedestrians. Councillors were told the new plans increased the size of the rooftop building to include a gym and larger bar.

Objector June Pierce said the reductions in height and width were “insulting” and the rooftop area would be bigger.  She said she had reported the demolition to the council environmental health team and Public Health England because of concerns.

Planning officer Alexis Moran explained that the design changes amounted to a “minor material amendment”. A report said the previous approval included conditions to protect the privacy of neighbours, limit noise from equipment, restrict the use of the rooftop area to residents only, and prevent its use between 10pm and 8am.

Cllr Jane Barnby said the proposals in the new application would improve safety for pedestrians in the parking area.

Councillors voted five to two in favour of allowing the changes, with one abstention. By the time of the planning committee meeting in September last year, 526 objections to the new 152-bedroom hotel in Torbay Road had been submitted. Opponents said it was the highest number of objections for any planning application in Torbay. An earlier version had been rejected for being too big, too high and out of character with the area.

After a three-hour meeting the committee approved the scheme. Objectors claimed it would set a precedent for high-rise development leading to Torquay ending up like the Spanish resort of Benidorm.

The hotel is on one of four sites being redeveloped by the Singapore-based Fragrance Group in what is described as a £100m investment in Torbay. Councillors heard that the four-star hotel with a restaurant, spa and roof-top bar would create 101 full-time jobs, compared to the 20 at the previous hotel on the site, and bring in estimated visitor spending of £2.7million a year.