North Devon to get scooting 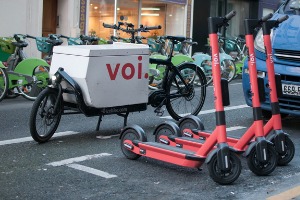 Further details about an innovative e-scooter trial in North Devon are set to be revealed soon.

Last November, North Devon Council was granted the right to a licence by the Department for Transport after working closely with Petroc and e-scooter company Voi Technology they submitted a proposal to run a pilot.

The DfT granted the license to run a trial in Barnstaple at some stage in 2021, although no details as to when it will begin have been revealed.

At present, you can buy an e-scooter but you can’t ride it on a UK public road, cycle lane or pavement without committing an offence, punishable with a £300 fixed penalty notice and six points on your driving licence.

But when details of the trial emerged last year, e-scooters could be hired and used legally within geographically set boundaries, and while riders wouldn’t need to take out their own insurance to hire one, they would need a full or provisional driving licence.

At the time, North Devon Council said that the scheme aimed to tackle rural transport challenges, particularly improving access to Petroc, where more than 4,000 pupils travelling to the main campus at Sticklepath in each week.

The trial will also enable the council to better serve the increase in population in the tourism season; helping people to move around without causing additional traffic, congestion and pollution, the statement issued in November 2020 said.

At the time, lead member for economic development and regeneration at North Devon Council, Cllr Malcolm Prowse, added: “We look forward to working with Voi and Petroc to take further positive steps towards a successful trial phase. This includes addressing the safety concerns and needs of other road users, especially vulnerable groups.

“Close planning and collaboration with Devon and Cornwall police will also go a long way to ensuring the safety and viability of the trial over the 12-month period.”