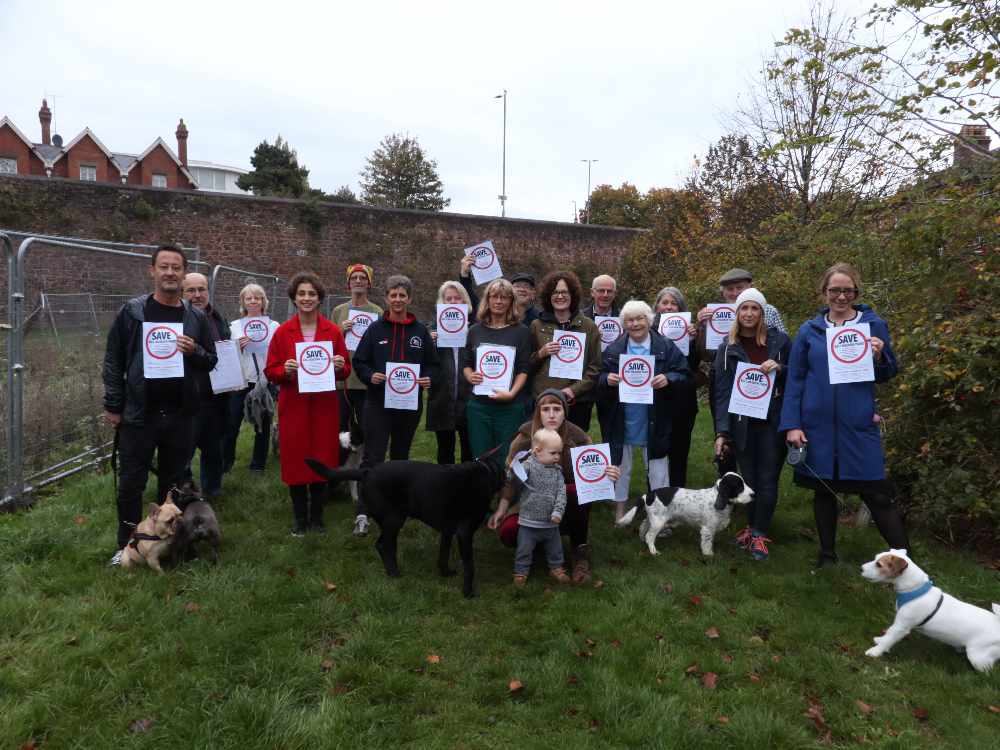 Only 1 of 207 comments supports idea

All but one of the 207 comments received after Exeter City Council announced they were considering disposing of the freehold of the 130 square metres of land at Bull Meadow Park were opposed to the plans, while a petition of 327 signatures against the scheme was handed-in to the council.

Residents living near Bull Meadow Park say they cherish the park, which is blessed with a magnificent array of ancient trees, a separate play area for very young children and a wide-open space for a variety of park users and the children to play sport.

But as part of Exeter Homes Trust’s £9m redevelopment plans of the Fairpark Almshouses, at the bottom of Magdalen Road and overlooking Bull Meadow Park, a small section of the park was proposed to be concreted over.

Exeter City Council’s Place Scrutiny Committee voted overwhelmingly not to support any recommendation that the council should dispose of the land.

The final decision over whether to dispose of the land will be made by the city council’s executive at their next meeting.

Cllr Natalie Vizard said: “The opposition to the sale of this piece of land is unprecedented, so I respectfully ask the committee to refuse the request to sell the land in Bull Meadow Park. This is a vital piece of open space that should be retained and not disposed of.”

Fellow ward councillor Matthew Vizard added: “There has been an unprecedented number of responses, the fact there is no significant financial gain for the council, and there are alternatives that can be used to proceed with the scheme. Sometimes we have to take unpopular decisions but this is not one of them. This is an opportunity for the council to say no and refuse to support this.”

Michael Carson, the City Surveyor for the council, outlined that there had been a request by Exeter Homes Trust Ltd to purchase an area of Bull Meadow Park at the end of Temple Road to enable the redevelopment of the existing scheme of 12 almshouses dating from 1928 to provide 31 almshouses.

He added that for requests like this, but the council has to go through a process to decide whether the principle of disposal is acceptable, and then they have to advertise the intention and then consider any representations. Mr Carson said: “Normally there are few, if any, but there is significant public interest and a large number of comments and a petition against this. The disposal does provide the best scheme in delivering the proposals for the almhouses but the strongly held views of the residents should be given due weight.”

The committee were told that the council would receive £25,000 for selling the land, plus £5,000 towards mitigation works, and only marginal revenue savings would be made on park maintenance.

Cllr Percy Prowse said that due to the number of objections, the council should not even be considering selling the land.

Cllr Keith Owen added: “We are being asked for our view on the principle of disposal and the starting point should be the principle to oppose the sale of green space. If we are to give up land that is valued by the community, I expect to see some benefit to them in return, but the number of objections shows that they don’t think they are getting any benefit, and a turning circle would encourage more people to drive their cars up the narrow road.

“I cannot see any reason why I would not be opposed to the sale of the land and the development can still be done without the turning circle.”

The committee recommended to the Executive, who will make the final decision that the land should not be disposed of to create an extension to the highway.

When the plans was announced last year, local residents called for alternative options to be considered and said they were dismayed as children would be losing their play space and they were deeply concerned as a road turning point will invite more traffic to the area and encourage drivers to speed up, thereby compromising the safety of their children.

Alan Williamson, chairman of Exeter Homes Trust, had said: “We are working hard across the city to help local communities try and alleviate homelessness in Exeter. This project would provide 31 affordable charitable homes that are desperately needed for people unable to remain in their own home due to failing health or other difficult circumstances.

“The trust does appreciate how valuable the park is for residents. However, the use of a small part of the park has been determined as the best option of competing priorities. Clearly, losing one small part of the park needs to be balanced against the very real and urgent need for affordable housing in Exeter at a time when many sites are being redeveloped for student accommodation, with far fewer developments in the city for local people, particularly those with insufficient means to buy or rent.”