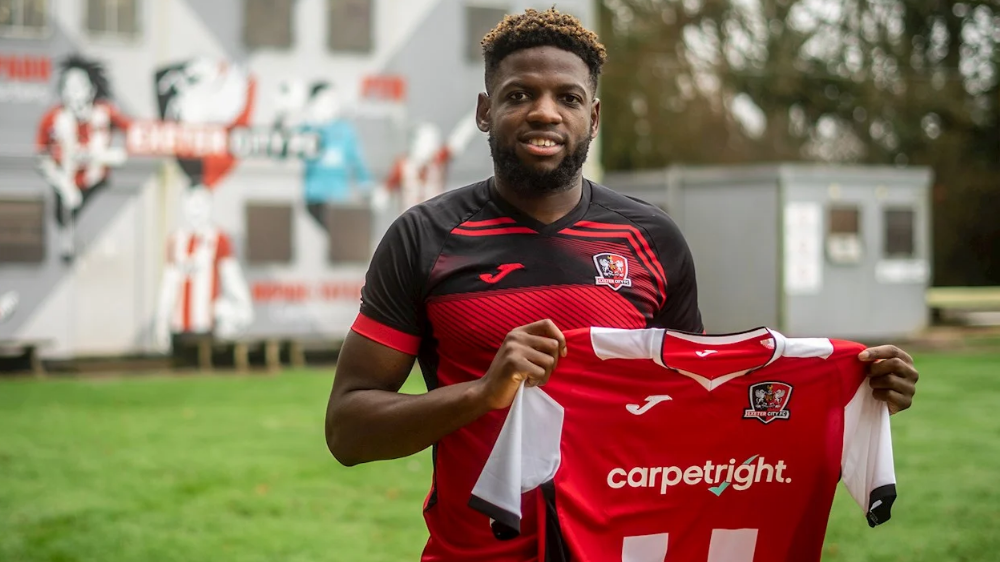 Striker on loan until end of the season

Exeter City's latest signing Offrande Zanzala says he is "buzzing about the opportunity" as he joins the Grecians on loan.

The 25-year old Congolese striker teams up with the Grecians having scored five goals in all competitions with his parent club, including three in the league so far.

Zanzala began his career at Derby County, having emigrated from his native Democratic Republic of Congo due to the 1999 Civil War. He made his senior debut for Stevenage whilst on loan in 2016 and scored his first of his 39 career goals for Accrington Stanley a couple of years later.

Brief spells at Crewe and Carlisle followed before making the switch across Cumbria to Holker Street.

The 6ft 1 centre-forward is a towering presence up top and he signed for the Bluebirds on a two-year deal in the summer. So far, Offrande has made 27 appearances this term prior to coming to St James Park. He will wear the number 18 shirt for the remainder of the season

Speaking on his arrival, City boss Matt Taylor was pleased to sign the target man.

"We looked at Offrande in the summer as he finished the season quite strongly at Carlisle and he has certain attributes on a football pitch which can't be underestimated," he said.

"He was in demand in the off-season and a lot of clubs including ourselves lost out to Barrow. He's probably had a difficult start to his career at Barrow and his name came up in conversation again, and the fact he was made available made us want to make the move.

"There is the obviously the situation with Sam Nombe - who isn't far away - and the lack of firepower upfront, and we having been lacking a player of Oz's ilk and physicality."