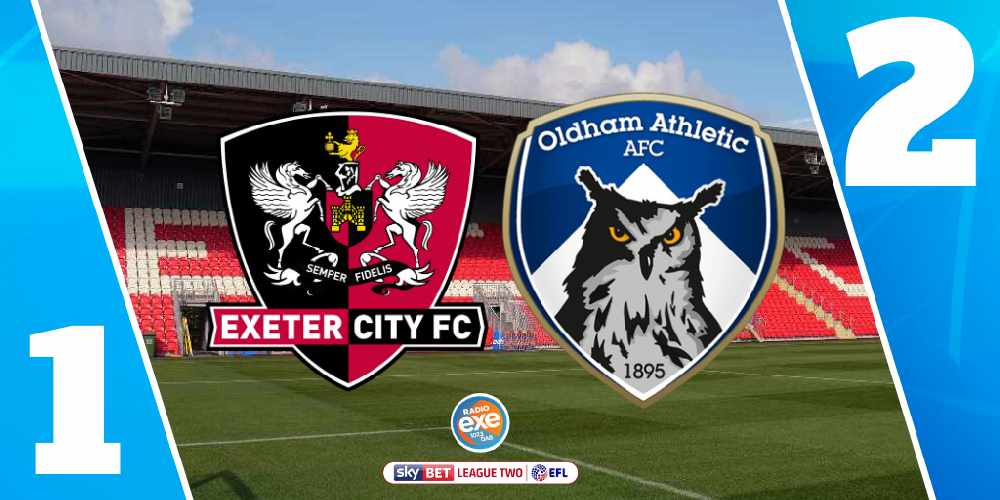 It’s Exeter’s second defeat of the season as they loosen their grip on the automatic play-off places.

Matt Taylor made just the two changes from Saturday’s draw against Bradford. Rory McArdle and Jack Caprice started, whilst Nigel Atangana returned to the bench.

City started the game well and took the lead inside 11 minutes; Randell Williams was on high alert to fire home a rebound into the roof of the net five yards out.

However, that’s as good as it got for the hosts as they were made to endure a frustrating rest of the half.

Oldham, who sat two points above the relegation zone prior to kick-off, pulled a goal back 10 minutes later through George Blackwood before Danny Rowe fired home an unstoppable 30-yard free kick into the top corner.

Late on in the half, City’s academy graduate Joel Randall received a yellow card for diving inside the box to round off a disappointing opening 45 minutes for the Grecians. They trailed 2-1 at the break.

A much better-looking Exeter side dominated the second period.

City created a handful of good chances and launched wave after wave of attacks; but they struggled to capitalise. Ryan Bowman forced the goalkeeper to make a good save low to his right, Archie Collins fired a shot just wide of the post and substitute Nicky Law had a shot cleared off the line during a one-sided contest.

The visitors put bodies on the line, and 11 men behind the ball, to play out a narrow win. Full time: Exeter City 1 Oldham 2. Exeter are back at St James Park on Tuesday night, they face Colchester at 19:45.