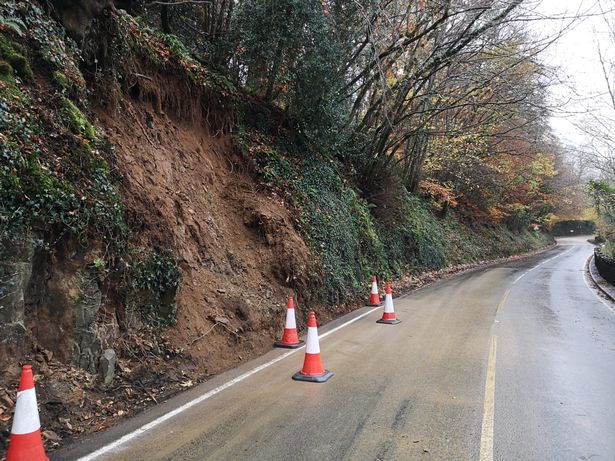 Landslip on the A386 at Landcross

Most areas of the UK suffered torrential downpours over the season, but none more than Holne on the southern edge of Dartmoor, where an incredible 899mm of rain fell in the Autumn.

Cllr Stuart Hughes, Cabinet Member for Highway Management, told Thursday’s full council (December 5) that the sheer volume of call-outs and incidents has had an impact on the council.

Answering a question from Cllr Brian Greenslade on the cost of highway maintenance caused by the recent heavy rain and whether there are still roads affected by floods, Cllr Hughes said that highways teams had done well to keep the county moving and that he is not aware that there are any roads still affected by flood water.

He added: “As of November 25, the council received over 326 public reports of flooding for the month, including reacting to 394 call outs, at least a third of which appeared to be due to standing water/flooding.

“Many of the of reports appeared to be as a result of defects and / or drainage systems failing due to sheer volume and blocked gullies, ditches, grips etc caused by leaf fall, debris and high water tables.

“The increased volume of defects and reactive responses alone have cost in the region of £400,000 to date and this will continue to increase.”

Cllr Hughes explained that the wet weather had a further knock-on effect and was affecting retaining wall and slope stability. He said: “For example the prolonged severe weather had been a significant factor in the landslip on the A386 near Landcross.”

The landslip occurred after a bus had crashed into a tree, which in turn caused the landslide, on the main road between Bideford and Torrington.

Cllr Greenslade said that the figures speak for themselves. He added: “It is an unwelcome dent in the budget so lets us hope the rest of the winter isn’t too bad.”

Cllr Rob Hannaford, leader of the Labour Group, asked for reassurance that the county was ready for any severe weather over the Christmas period, saying: “There is a  consensus that we are due some snow in Devon as early as next week and around the Christmas period. Can you reassure us that we have plenty of grit and if we have severe weather, we will be ready fort the challenge?”

In response, Cllr Hughes said that the gritting teams are always ready and have already taken to the roads several times this winter.

He added: “Wild and met is what they are currently forecasting over Christmas, so fingers crossed they don’t have to do too much gritting over the holidays and they can enjoy their Christmas.”

Devon County Council has already confirmed that no changes will be the roads that will be gritted this winter.

The primary salting network is made up of the major routes where the majority of vehicle movements take place and also includes accesses to hospitals, ambulance stations, fire stations, other emergency service establishments, railway stations, airports and secondary schools.

The length of the 37 routes which form the primary salting network is 20 per cent of the road network but it covers around 70 per cent of traffic and access to 80 per cent of Devon’s population.