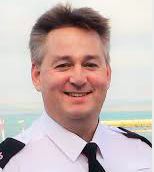 Behave, in other words

Devon & Cornwall Police is calling for people to  respect the communities they live in after a series of drink related problems in East Devon. They've followed that plea up with a show of force at Orcombe Point on Thursday night, where the previous day a number of fights became a major altercation. Police issued a dispersal order in an effort to restore order to the beach. The people affected can't go back till Friday morning.

Later on Wednesday evening, a black or minority ethnic man, aged 20, was hit with a glass bottle. He's expected to recover, but has serious head injuries.

Chief Superintendent Matt Lawler said: “We wholly appreciate many people in our communities have been in lockdown for some time and the chance to meet in larger groups outside in good weather is an opportunity to socialise and enjoy. However, the impact on the wider community must be respected and drink related episodes like those at Orcombe Point on Wednesday cannot be repeated.

“While we want people to be able to have a good time and enjoy themselves, drinking to excess and meeting in such large groups is putting themselves and many others at risk. While regulations around covid have been relaxed to an extent, the government continues to ask all people to respect social distancing and to remember coronavirus remains a serious threat to public health.

“Police officers should not be put at risk simply because people want to drink and let off steam. In a number of cases last night officers [in Plymouth] have been assaulted because of drunken, anti-social behaviour – that is unacceptable.