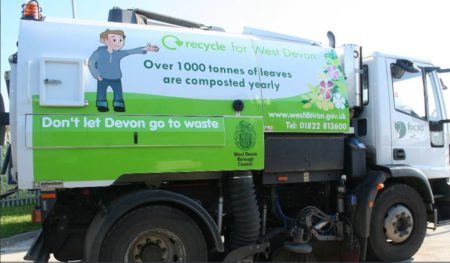 Councillors have agreed to the change from October.

Councillors have agreed to go ahead with a trial that would see rubbish bins collected three weekly.

The trial for around 1,000 homes in West Devon would see black sack collections for non-recyclable waste take place every three weeks, rather than the existing fortnightly collections.

It would begin in October, when West Devon Borough Council will also be introducing an improved recycling service, so that every household can recycle a lot more materials at the kerbside.

Residents will from October be able to recycled plastic pots, tubs, trays, cardboard drink cartons and foil, with these items to be collected  weekly from the kerbside

Recycling and food waste would still be collected every week from the kerbside, with the aim of the changes to shift the emphasis away from waste disposal to recycling.

Cllr Caroline Mott, West Devon Borough Council’s Lead Member for the Environment said: “We have a duty to do something now to protect our planet.  Residents have been asking us for a long time to improve our waste and recycling service, and to enable them to put out more materials for recycling, such as more plastics, tetrapaks and foil.

“The trial of the three weekly black bag collection is the next logical step.  If your dry recycling and food waste is collected every week, and you recycle everything that you can, then there will hardly be any waste to go in your black bin.

“For some residents there may be a fear of smell or vermin when waste is stored. However, all food waste and dry recyclables will continue to be collected on a weekly basis.

“Climate change and biodiversity loss are real threats to our world and we have to do our best, in every way we can, to make a difference. Part of this is to make the best use of our planet’s resources by reducing, reusing and recycling what we use.”

Across the country increasing the amount of materials that can be collected from the kerbside has been proven to reduce the amount of black bag waste that is thrown away, a council spokesman added.

Back in 2017, East Devon District Council switched to a three-weekly residual waste collection, with recycling rates having risen more than 10 per cent since the switch took place.

In 2016/17 the district was recycling 46 per cent of its waste, which increased to 54.2 per cent in 2017/18 following the introduction of the new waste service. Final figures for 2018/19 have not yet been published, but the council was averaging nearly 60 per cent recycling rates for the first 10 months of the year.

West Devon recycling rate has declined year on year since 60 per cent of domestic waste was recycled back in 2010, which saw the move from weekly to fortnightly black sack collections.

In recent years the council has seen a gradual decline in its recycling rate and the recycling rate for 2017-18 was 51 per cent, a report of Jane Savage, commissioning manager (Waste), told councillors in a report to the meeting.

She added: “Three weekly residual collections have been shown in other authorities to deliver savings and increase recycling rates. A small controlled trial over a long period will give sufficient data to calculate the benefits from a borough-wide scheme, whilst minimising any financial and reputation risk to the council.”

The trial will help the Council understand the issues for people in flats and with large quantities of non-recyclable waste, such as nappies.

A report will come back to the hub committee after six months from the trial beginning, detailing any environmental and financial impacts and determining the effects of a borough-wide scheme.

The annual net savings expected from a three weekly scheme across the whole borough is estimated at between £100,000 and £150,000 per year, the report states, adding: “Currently 16-20 local authorities operate a three or four weekly residual collection service. The majority of these have experienced an increase in recycling rates and a reduction in costs after introduction of the system.

“There is currently no evidence to suggest that littering and fly-tipping is increased when residual frequencies are reduced.”

If the trial is a success, a borough-wide roll out could take place in March/April 2021, if agreed by the Hub Committee.

The council are also asking residents who are passionate about recycling and helping their community to recycle more to become a recycling champion, who would play a vital part in the educational campaign to help your community learn more about what can and cannot be recycled.