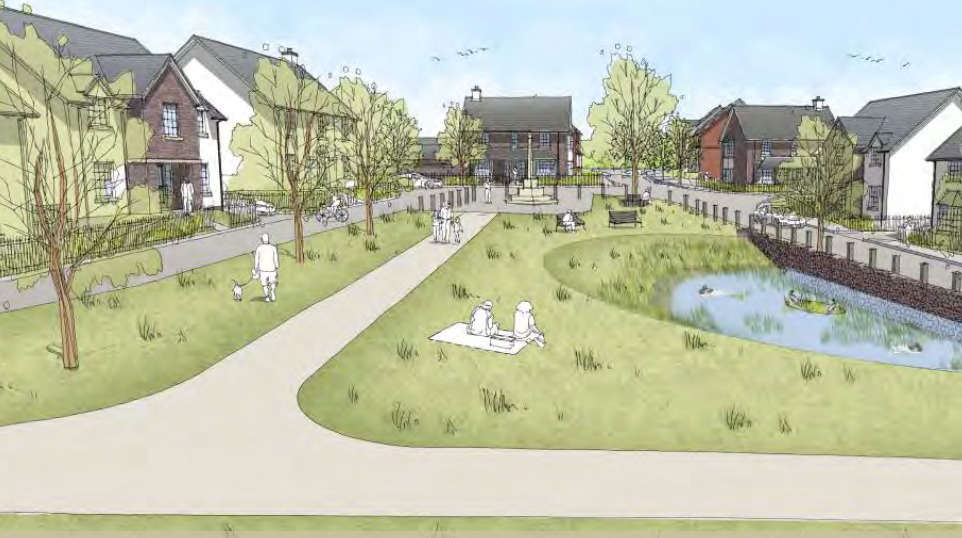 Agreement needed "by each and every person"

Detailed plans for 60 new homes in Sampford Peverell will be decided at a later date after councillors deferred the application.

Following initial refusal by Mid Devon District Council’s planning committee in 2018, the development at Higher Town has had outline permission after an appeal last year.

At their meeting on Wednesday [29 June], members remained dissatisfied with various aspects of the next stage ‘reserved matters’ application – for the appearance, landscaping, layout and scale of the properties. It was a sentiment shared by a number of public speakers.

Part of the plan includes a mix of single and two storey properties, of which 39 are open market, comprising of seven 3-bed bungalows and different sized houses.

There would also be 18 affordable units – typically defined as 80 per cent of market value – ranging from one to four bedrooms, as well as three plots for self-build houses.

Spanning over four hectares of currently agricultural land, the application has space for a play area, village green and space for allotments.

Recommending approval, council planning officers concluded that “comprehensive consideration has been given to the overall design, scale and layout of the proposal.”

But a number of objections were raised, most notably from Sampford Peverell Parish Council.

Heather Culpin, from that council, said: “Firstly, we want to say that the overall design of the site has many good features and we appreciate that care has gone into it.

“We hope that eventually it will be a welcome and integral part of the village. However, we feel the application in its current state has flaws and omissions which prevent us from approving it as it stands.”

She raised issues with the impact of street lighting and the size and location of the play area, but said the parish council’s key concern was road safety; specifically that roads around the site would not be subject to 30 mph speed limits.

“When vehicles and pedestrians leave the site, they will turn onto 40 or 60 mile an hour roads. We cannot understand how safe access can be ensured without the 30 mile an hour restriction that the inspector relied on,” Cllr Culpin said.

The highway authority, Devon County Council, said in the planning report that a previous survey showed the vast majority of speeds “are in the region of 30 mph, therefore the access [the developer] has approval for is acceptable without the 30 mph [traffic regulation order] in place.”

Mid Devon councillor Jo Norton (Green, Canonsleigh – the ward which includes Sampford Peverell) also expressed concerns, wanting action to mitigate the impact on neighbouring properties and improve access for disabled people. She questioned why the play area was “encroaching” on the green open space that was only meant for “informal use.”

They said 42 electric vehicle charging points would be provided, but councillors highlighted the lack of air source heat pumps or solar panels.

After questioning why the council was not insisting on their inclusion, a senior officer said current national policy means it it difficult to impose such conditions on developers. They hope an upcoming change gives the council “more for us to dig our teeth into.”

A proposal to defer the application was made by Councillor Christine Collis (Conservative, Canonsleigh), who said: “I just think that there are so many questions and so many new conditions that should be put on all of these things.

She continued: “So until all of these things are put in place and well and truly agreed by each and every person, I think it should be deferred.”

The committee agreed, citing more than a dozen reasons. The application will come back to a future meeting.