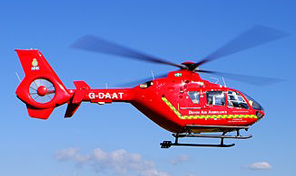 The coastguard say she suffered a suspected heart attack

A teenage girl has been airlifted to hospital after an incident on the seafront at Sidmouth.

The ambulance service was called to the incident at 2.21pm this afternoon, with the casualty taken to a hospital in Bristol.

A South Western Ambulance Service spokesperson said: "SWAST was called at 2.21pm after reports of a patient getting into trouble in the water at Sidmouth.

"We sent two ambulances, an air ambulance, a four wheel drive ambulance and an operations officer to the scene where the female patient was treated by ambulance teams.

"The patient was flown by air ambulance onto hospital to receive further treatment."

In a statement on Facebook, they said: "Tasked to assist the Air ambulance and southwest ambulance paramedics with a young female with a suspected heart attack on Sidmouth beach.

"Paramedics gave treatment to the casualty on Sidmouth seafront before she was flown to Bristol children's hospital.

"Thanks to Jurassic paddle sports staff and beachgoers, who gave CPR and used a defib to help her unit the paramedics and air ambulance arrived. We wish her a speedy recovery."