Thousands of homes 'underwater by 2050' 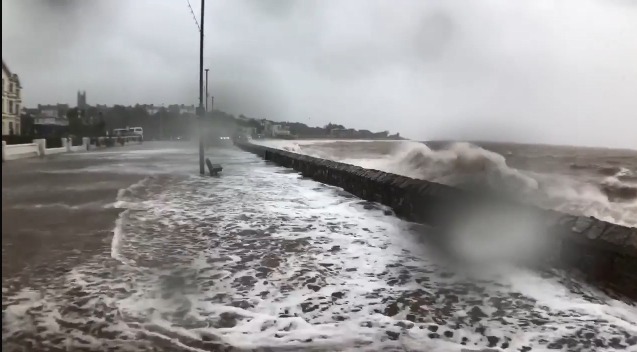 Areas around Westward Ho!, Topsham and Newton Abbot would be some of the worst affected

Demands have been made to speed up flood alleviation measures after a new report showed that large parts of Devon and thousands of homes could be underwater by 2050.

The study has been conducted by Climate Central, an independent organisation of leading scientists and journalists who research climate change and its impact on the public.

Their interactive map based on new sea level research showed that major conurbations in Devon are expected to be below the level of average flooding within 30 years’ time.

Thursday’s Devon County Council meeting saw councillors call for action to be taken as a proactive response to the study and to give reassurance to those residents whose homes and places of work are predicted to be underwater.

Cllr Gordon Hook said: “The report states that large areas of Devon will be underwater by 2050, just 30 years away. We are having to prepare for and cope with the problems right now. The report suggests that large parts of Newton Abbot town centre will be adversely affected, as will Westward Ho; Braunton; Topsham; Exmouth and Exeter amongst many other areas.”

Cllr Brian Greenslade added: “The flood risk map for 2050 shows a large part of Barnstaple and the Taw Estuary as flood risk areas. Some time ago I asked about progress with further flood alleviation measures for Barnstaple, especially in the Pilton Park area. There did not appear to be any concrete steps in hand so can the Portfolio Holder give me any hope of progress being made?”

In response, Cllr Roger Croad, cabinet member for Community, Public Health, Transportation and Environment, said that the council works in partnership with the Environment Agency to address the risks and their role as Lead Local Flood Authority, they  will be revising and updating the Devon Local Flood Risk Management Strategy next year

He added that while the map shows the theoretical risk of flooding in coastal areas associated with projected future sea level rise, it does not take account of existing flood defences.

Cllr Croad said: “While having clear value in illustrating those areas theoretically at risk from rising sea level, it doesn’t enable the people of Devon to realistically predict the actual likelihood of future flooding in these low lying areas.

“This will be dependent upon the maintenance of existing flood defences or their extension and upgrading to provide the necessary standard of protection to deal with this future risk. The body with the specific responsibility for such coastal (and associated main river) flooding is the Environment Agency.

“On this basis, it is their role to anticipate and plan for such risk, rather than it being the responsibility of Devon County Council. Having said that, we often work closely in partnership with the Environment Agency in addressing such risks, an example of this being the DCC investment of £3 million in the Exeter Flood Defence Scheme.

“Also, in our role as Lead Local Flood Authority, we will be revising and updating the Devon Local Flood Risk Management Strategy next year and this will take account of the latest climate change projection and accord with the new national flood risk management strategy.

Answering a question from Cllr Greenslade in relation to the Pilton Park area of Barnstaple, Cllr Croad said an Environment Agency led project involves a current plan to start work on the business case in 2023/24, with construction anticipated in 2025.

He added: “Defra’s currently approved programme of flood and coastal risk investment runs through till 2021, with Barnstaple being on the next six-year programme (2021-2027).

“The business case preparation phase will include stakeholder and public consultation, and the gaining of planning permission. No significant progress in the planning for this scheme should be expected prior to these programmed dates.

“The Environment Agency is also starting work this year (i.e. a two to three year project) on the Taw Torridge flood model covering the entire estuary, including Barnstaple. This will be used in the design of any upcoming schemes and will take account of the latest available projections for climate change, including anticipated sea level rise.”

But Cllr Greenslade called for the process to be speeded up. He said: “Time and tide waits for no man and I am not encouraged by the timescales. Is there nothing we can do to try and speed this up, as we frequently we get caught out by heavy rain and flooding when we don’t expect it?

“So many properties are at a great flood risk and we should be banging the drum rather harder than we are on this.”

But Cllr Paul Crabb questioned the veracity of the maps. He said: “The map is designed to just get a lot of red on it, and the Environment Agency is a better source of information.”

In coastal North Devon there are several areas potentially affected on either side of the Taw and Torridge River estuaries.

According to the map Barnstaple, Braunton, Fremington, Yelland, Westward Ho!, Appledore and Bideford would be worst hit.

Huge areas of land at Chivenor, Wrafton, Velator and Braunton Burrows would also be underwater.

Locations near the mouth of the River Exe would also be at threat according to the study.

Exmouth, Topsham and Exminster look like the worst areas, with Exeter not faring too well either.

As you can see, Plymouth’s map is covered in red stretches.

Areas around the Hoe, Torpoint, Morice Town, Devonport and East End bare the brunt of the worst flooding, according to the study.

Newton Abbot and the surrounding area are very visible on the map with swathes of red everywhere and either side of the River Teign.

Large areas including nearby Kingsteignton and even Newton Abbot Race Course show as being under water by 2050.

Just down the coast, large coastal areas of Paignton also appear to be at high risk.

Totnes, on either side of the River Dart, could also be badly affected.

Another badly hit area, Seaton could lose its busy Harbour Road, Esplanade and even the parish council offices.

Axmouth, just over the water, would also suffer with the rising water.