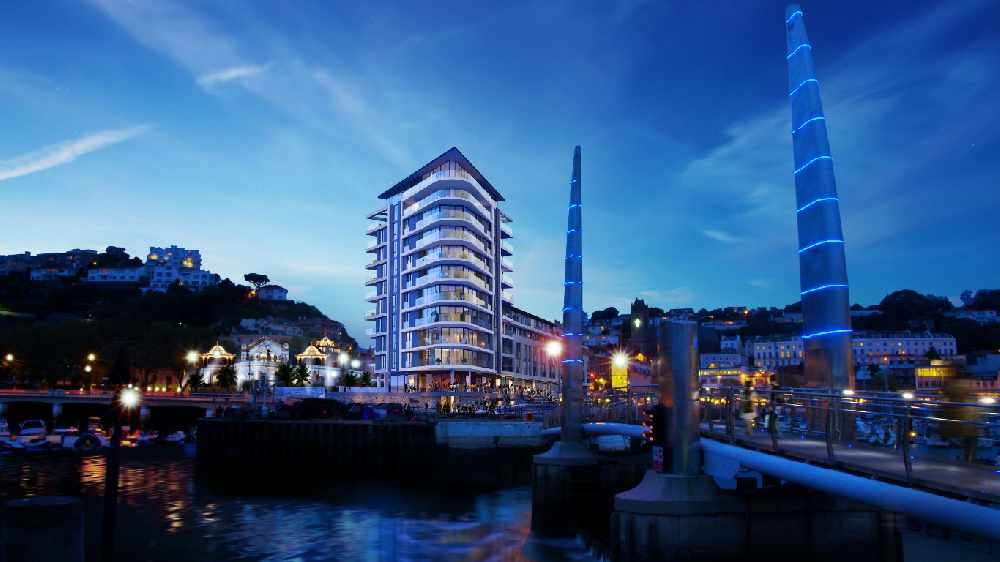 Plans were submitted 4 years ago

There were cheers from members of the public as Torbay planners voted unanimously to reject the applications which were back before the council after being blocked by a legal challenge last year.

Councillors heard that the developer had failed to provide new information to resolve the issues raised by the judicial review, including justification for the impact on heritage sites and a lack of up-to-date ecology assessments.

The plans lodged in 2015 proposed turning the disused listed Pavilion into the “front of house” for a 60-bed hotel including functions rooms, a spa, restaurant and bars, with a first-floor link to the bedrooms.

The overall scheme included 43 flats in an 11-storey tower and a five-storey section with a ground-floor restaurant and shops, a new harbour walkway, marina facilities and 289 parking spaces including 69 on Cary Green, currently a public open space.

Members of the Save Cary Green and Torquay Pavilion Campaign which brought the successful legal challenge spoke at the meeting of Torbay Council’s development management committee on Monday.

Cordelia Law complained that the authority had refused to listen to the views of objectors for six years, showing “contempt and disdain”. She said the authority had twice approved an unlawful development and failed to address the concerns and opinions of residents.

Ms Law said after the meeting: “It’s a victory for Torquay, for the community, and for our heritage for the future.”

Independent Brixham councillor MIke Mory proposed refusing the applications in line with the recommendation from officers.

He said the scheme had originally been presented as finely balanced between the economic benefits and impact on the historic setting, and approval had been “far from unanimous”.

Now the applicant had not come forward with the information needed after the judicial review, the committee had no choice but to refuse.

He said: “Personally I would like to see some sort of proposals being worked up sooner rather than later, to ensure the Pavilion is not only renovated but rejuvenated for the future.”

He said: “We need to be tackling what opportunities are down there with the community, rather than despite the community.”

At the meeting on Monday afternoon, there were cheers and applause from members of the public when the councillors on the committee all voted to refuse the applications for the hotel and flats, and listed building consent for work on the Pavilion.

A report to the committee by head of planning Robert Brigden said the development’s size and impact on local heritage had not been justified because of a lack of “robust, up-to-date information” about its viability and economic benefits.

It said there was not enough information to show the proposals were in line with the council’s policies on a developer’s payment towards social housing and community benefit.

Other problems include a lack of up-to-date ecological surveys and assessment, and lack of evidence of the “special circumstances” needed to justify the development of Cary Green, which is set aside as a Local Green Space in the Torquay Neighbourhood Plan.

The report said council officers wrote to the applicants in October, asking for a response to the legal issues raised in the judicial review which took place in July. They were given a deadline of the end of January this year, but the council had not received the information.

Questions were raised during the legal challenge about the overall cost of the project, initially widely publicised at £32m but later reported to councillors as £25m.

An earlier planning report to the council gave the estimated repair costs of the Pavilion at £2.7m as part of the hotel scheme.

Objections to the proposals include over-development of the historic area, the height of the tower and the parking on Cary Green, which is one of a series of formal gardens created along the seafront during the Victorian era and is protected by a historic covenant governing its use.

The scheme by Torquay Waterside Developments Ltd would have seen the Dorset-based Nicolas James Group bring its luxury brand of Harbour Hotels to Torquay, creating more than 150 jobs according to an estimate in a council report.

The ornate Pavilion with its cream stone walls and green copper roof was built  as a theatre and later used as a concert hall, cinema and skating rink, but closed in 2013 after being turned into a shopping arcade.

Built on land reclaimed from the sea and opened in 1912,  it was known to admirers in its heyday as Torquay’s Palace of Pleasure and was listed to protect it in 1973.

Over the years it was used as a concert hall, theatre and cinema, with its last stage show in 1976. It was then used as a skating rink between 1979 and 1983, and reopened as a shopping arcade in 1987 after restoration.