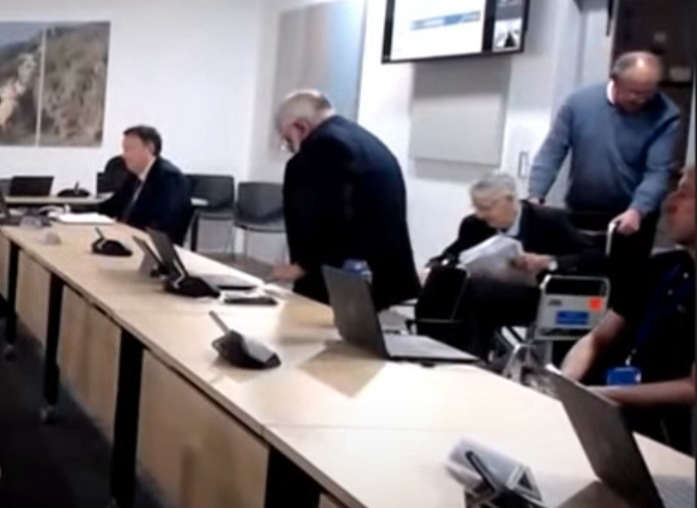 A 90-year-old South Hams councillor has ‘walked out’ of a meeting in his wheelchair after trying to raise residents’ concerns about garden waste collections.

But after South Hams District Council announced that garden waste collections face further disruption because of staff shortages, he became involved in a heated exchange about being allowed to speak.

Waste collection problems in the area have been rumbling on for some time.

In August last year residents were told they would need to dispose of all their own garden waste after FCC, the company contracted by the council to do the job, said it needed to suspend collections.

Residents were told to either compost garden waste or take it to one of the three recycling centres in South Hams operated by Devon County Council.

Then in October driver shortages led to the district council extending the suspension of garden waste collection for the winter. It said the service would restart in spring.

FCC restarted garden waste collections in March but the latest announcement that they were being postponed again just weeks later has infuriated residents and some councillors.

During a meeting of the the council’s overview and scrutiny committee on Thursday, members had finished discussing the 2021-22 annual standards report, but before moving onto the next agenda item Cllr Pennington interrupted.

When he added that it was part of the discussion on standards, the chair, Cllr John Birch (Lib Dem, Totnes), said: “I think we have concluded that item.

“I asked on several occasions if any member wished to speak and you didn’t indicate that you wanted to say anything.”

Cllr Pennington insisted: “I did but you didn’t hear me” before adding he wanted to talk about garden waste collections as part of discussions on value for money and health and safety.

A heated exchange following with Cllr Birch insisting that Cllr Pennington could not raise the matter at that time.

Cllr Pennington continued: “We agreed as a council that we would reinstate [garden waste collections] in spring of this year.”

Cllr Birch asked Cllr Pennington to stop and added, if he didn’t: “I will have to ask you to leave the meeting.”

Cllr Pennington replied: “This is not on.  This is undemocratic.” But he was told he must stop talking about it.

After being told again by Cllr Birch that he may be asked to leave the meeting, Cllr Pennington said: “This is the first time I’ve walked out of a meeting in 40 years but I’m walking out.”

He was then helped to leave the room in his wheelchair before the meeting continued without him.

Speaking later he explained why he was so passionate about challenging the chair.

“People are being asked to pay money and pay council tax and they’re not getting certain services anymore,” he said.  “And this one service, which we’ve done regularly, was the collection of garden waste.

“So all I wanted to put forward was that we agree as a committee to resurrect the service as agreed last year alone for everybody, which they pay for and don’t get.”

Cllr Pennington insisted he was campaigning for the whole district, not just people in his ward.  “Not just my residents, but the whole of South Hams residents,” he said.

“It’s also – it says in that agenda – things that can be unhealthy.  It’s unhealthy to have stuff stuffed in brown bins to the top.”

His biggest concern appeared to be about being silenced by the chair during the meeting.

“But I think the way he did it, frankly, was disgraceful. I mean, it was just disgraceful.

“And my personal view. I’ve never had to stand for anything like that from anybody.”

“I mean, you may disagree – and okay – you could disagree. You could put it to a vote and we could all vote on it.”

He also hinted that the government was setting a bad example.

“But you just can’t stop under a democracy.  It’s getting worse than the prime minister on this sort of thing. It stops people from speaking. Not good enough.”