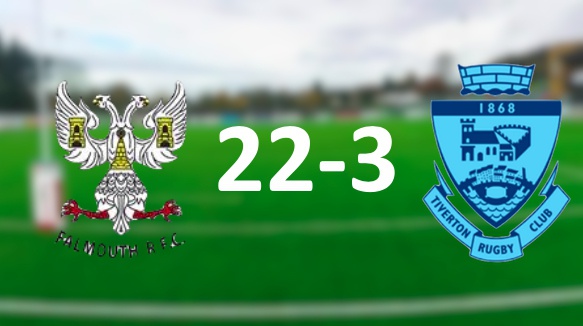 Reflecting on the game, Tiverton director of rugby Jon Hill, says: “Taking a depleted squad to Cornwall was always going to affect our chances of coming away with league points, and so it proved.

“Debutants Dino Bozic and Henri Dequenne performed admirably but were a little unfamiliar with calls and patterns of play, and the same could be said of Tom Stevens, a back rower playing in the centre! That said, we certainly pushed the hosts hard and in fact dominated the first half with lots of possession. Man of the match went to Matt Down, pressed into action it of position as a scrum half, due to an injury to captain Jack Sampson that could see him missing for the next three months.

“Our scrum was once again very dominant , but we didn’t get any reward in that area. Our drive maul game was strong, but once again, we felt aggrieved at how this was halted. We didn’t take our chances and then all of a sudden having had all of the momentum and being only ten points down into a big wind , we concede two soft scores in quick succession and the game is lost.

“We must look to improve our ability to convert pressure into points , and also at our mental ability to reset when we feel a decision has gone against us, or in the immediate period after conceding. That said, as a group of players that took to the field, their commitment was absolutely 100% and we gave a good account of ourselves with a very depleted squad, who will have benefited greatly from the experience of playing at this level.”

“So at the half way point in the season , we sit in fifth place with a high number of bonus points. We now need to show more consistency with availabilities and look to get another 10% out of the guys as we look to push on. Having several players back this weekend should help for a more settled and familiar side, in what is a big game to sign off with before the Christmas break.”