Chiefs defeat Glasgow in round two 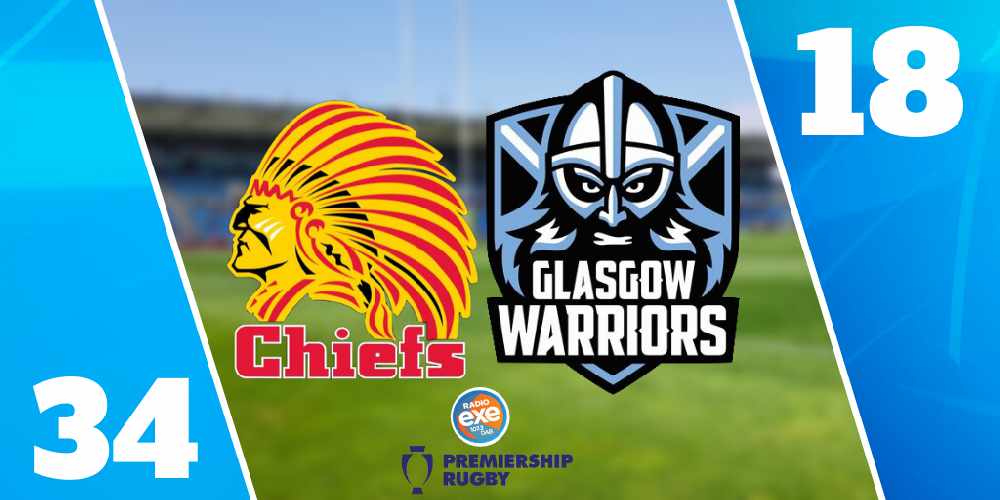 Exeter Chiefs came from behind at half-time to beat Glasgow Warriors 34-18 at Sandy Park in round two of the European Champions Cup.

The former Premiership champions now sit top of Pool Two in the Heineken Champions Cup with a healthy ten points.

It’s a competition that Exeter have struggled with in the past. Rob Baxter’s men have only qualified from their pool once - but following back-to-back wins in the opening two games, it looks like they’ll finally come to the party this time out.

Rob Baxter made a few changes from their victory last weekend – Jack Nowell made his first start for Exeter since the 2019 Rugby World Cup and Harry Williams came into the firing line. All eyes were on Baxter’s summer signing Stuart Hogg, however, who came up against his former club - where he spent nine years.

The visitors had a brilliant opening spell to the contest, they launched an early onslaught, and deservedly took the lead. Glasgow made two excellent breaks inside 10 minutes to set camp deep inside Exeter’s 22. Following constant pressure on Chiefs’ try line, Nick Grigg eventually touched down under the posts.

The Chiefs responded well, however, and took advantage of a Glasgow mistake to reduce the deficit. The Scottish side knocked the ball on 35 metres out, Chiefs were awarded the penalty, and Joe Simmonds slotted three points with the boot.

On the back of another penalty 15 minutes later, this time on the half-way line, Slade kicked deep into the corner. Exeter’s lineout was dominant - and it led to Johnny Hill dotting down in the corner. Simmonds with the extras.

The Warriors finished the half strong – kicking two more penalties to restore their lead. It ended Exeter 10 Glasgow 13 at the break.

Rob Baxter couldn’t have wished for a better start the second half – two minutes in, his side scored another try. England duo Jack Nowell and Henry Slade combined exquisitely to breach Glasgow’s stubborn line of defence. Nowell used fancy footwork to skip past three players, before being tackled, the Cornishmen offloaded the ball to Slade who touched down under the posts. Simmonds with the extras.

Salde’s try gave the hosts strong momentum and all of a sudden, Sam Simmonds powered his way over for Exeter’s third try. Simmonds was at the back of a driving maul that couldn’t be stopped. His younger brother kicked the extras.

The Chiefs really put their foot on the gas on the hour mark and scored a sublime bonus point score. Slade produced a brilliant grubber kick for Tom O’Flaherty to latch onto – the winger outpaced all the defenders to touch down in the corner. From the tightest possible angle, Simmonds added two more points.

Simmonds kept the scoreboard ticking by adding three more points directly in front of the posts after Exeter were awarded a penalty for a shoulder charge.

The Chiefs continued to control territory until the final whistle – but in the final few minutes, Glasgow scored their second try of the contest from the wing. It ended: Exeter Chiefs 34 Glasgow 13.