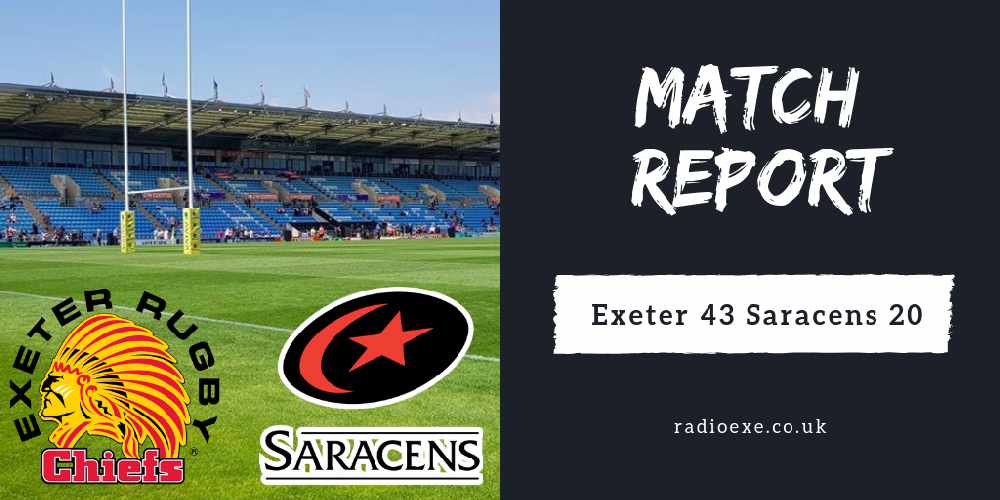 A young Exeter Chiefs side, managed by Exeter’s skill coach Rickie Pellow, took on Worcester Warriors in the Anglo Welsh Cup last weekend and lost 31-24. Pellow knew only a bonus point victory against Saracens would see his side progress into the next round of the competition.

Sarries on the other hand, came into this game pumped full of confidence after beating Leicester in the same competition 29-20.

Looking to stamp their authority in the first team, the Chiefs youngsters looked to impress with every given opportunity. And Tom O’Flaherty did just that. Within 10 minutes, Chiefs took the lead.

Following a penalty on the half way line, Joe Simmonds kicked the ball deep inside Saracens 22. Winning the line out, Exeter worked several phases of attacks with a good combination between the forwards and the backs. When they worked the ball out wide, the Saracens defence was stretched and allowed O’Flaherty to score Exeter’s first try of the game. Joe Simmonds was narrowly unsuccessful with the conversion attempt.

Straight from the restart, Exeter stole possession and launched another promising attack. In quick succession, they turned their early domination into more points. Finding themselves just 5 meters out, the Chiefs were awarded a scrum under the posts. The experienced Thomas Waldrum picked up the ball from the base and fed Ollie Devoto who dived over the line. This time, Simmonds successfully kicked the extras.

The Chiefs fans were still celebrating their second try when the hosts scored a third – they couldn’t quite believe it.

A clever kick from Jack Maunder pinged Saracens back in their own 22. The line out was disrupted, Chiefs turned the ball over, several phases later Moray Low was driven over the line. Simmonds again with the extras.

For the first time in the game, the visitors breached Exeter’s defence. Tom Whitely showed electric pace to touch down in the corner. The attempted conversion hit the post keeping the score at 19-5.

Just as Saracens looked to score their second try, the ball was knocked on 5 meters out. In a blink of an eye, Exeter countered through the forwards. It was Exeter’s new signing who worked the magic. Santiago Cordero skipped past 4 players to set free Jack Maunder who scored his second of the game, Exeter’s bonus point try. Simmonds once again successful with the conversion.

It was tries galore in the opening 40 minutes, Sarries bagged themselves another 5 points. Rotimi Segun scored in the corner after some slick off-loading by the Saracens backs. Malins couldn’t convert the kick.

In the dying embers of the first half, Saracens won a penalty under the posts. Opting for the line out, Max Malins exploited a hole in Exeter’s defence to score another 5 points for Sarries. For the third time, their attempted conversion was missed. Never the less, the visitors reduced the deficit to just two scores leading into the break.

With Exeter securing the bonus point, all they had to focus on was a strong defensive second half display.

In Ricky Pellow’s eyes, the best form of defence is attack. And Exeter’s fifth try was a one-man attack. Ollie Deveoto showed sublime upper body strength to break through several tackles and touch down under the posts. Simmonds eagle eyed with the boot.

The Chiefs really started the enjoy themselves. Yet again, the Saracens defence was stretched allowing the Chiefs wingers space in behind to exploit. When the ball fell into the hands of O’Flaherty, another try was inevitable. He dived over the line to score Exeter’s second try in 2 minutes. With the wind picking up, swirling its was around the ground, Simmonds couldn’t capitalise on maximum points.

It was fair to say, the high expectations of the first half didn’t live up to the second. Exeter’s new signing, Cordero has impressed on his Chiefs debut, he produced several darting runs and seems to pass defenders with ease.

With everything going Exeter’s way, Saracens were given a boost. Chiefs player Murray Low received a yellow card for an off the ball tackle. Directly after the incident, Saracens took full advantage and scored another try from a driving maul – conversion missed.

However, Exeter cancelled out any chance of a comeback, giving fans a sigh of relief, Paul Davis scored Exeter’s trademark catch and drive try – Chiefs sixth of the encounter.